Meath need hope and history to rhyme against Dublin 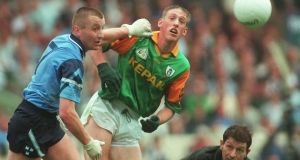 Meath’s Trevor Giles Meath and Eamon Heary of Dublin knock referee Brian White out of the way as they battle for a loose ball in the 1996 final. Photo: Matt Browne/Inpho

There will be historical echoes of a more mundane kind on Saturday evening when Dublin take on Meath in the Leinster final as part of the Bloody Sunday centenary commemoration in Croke Park.

The last time Dublin lost an All-Ireland title in the province was the final of 1996, against Meath. As with this year, the champions were under new management and were surprised by a youthful Meath team that had put up big scores going into the final.

Somewhat superficial, maybe, given that Dublin at this stage are within three matches of creating a new, six-in-a-row landmark in All-Ireland history, but Meath have been painstakingly rebuilding over the past two seasons.

Promoted to Division One a year ago, they may have gone straight back down but were very competitive, especially since the intercounty resumption in October and also within the last 18 months they ticked the box of qualifying for the 2019 Super 8s and gaining vital experience.

That progress is part of an encouraging process, according to Trevor Giles, who was the orchestrator of Meath’s 1996 coup which set the team on the road to that year’s All-Ireland and individually for him, the Footballer of the Year award.

Speaking at this week’s launch of Leinster GAA’s Beko Club Champion competition, Giles, who has also served as a selector in recent years, accentuated the positive.

“There’s definitely optimism in the county. They’ve been competing against better teams and beating those they should be beating. There’s a very nice minor team that beat Dublin convincingly in the first round and hopefully they’ll get to finish their season.

“A manager can tell you, ‘you’re a great footballer,’ but if you’ve had a couple of heavy beatings by Dublin, you’re going to be thinking, ‘no, I’m not. I’m not as good as the likes of these.’ But if you’re competing at the top level, marking good players and holding your own, that’s when you start believing.”

They go into this weekend’s final having scored 50 per cent more goals in their most recent two matches than Dublin have managed cumulatively in the past two provincial championships. This is more than a happily freakish statistic because what killed Meath in last year’s Leinster final was the astonishing litany of inaccuracies rather than any inability to create opportunity.

“I know they’ve scored seven and five goals in the championship,” said Giles, “but in the league they consistently put up good points’ totals - 17 in Clones and 19 in Parnell Park, 17 in Kerry. I think attacking play has improved. Young players getting goals is never a bad thing.

“Defensively they were a bit unhappy with last Sunday, which had actually been a strong point in recent times but I wouldn’t worry that’s suddenly become a problem.”

Taking Saturday in context, they will play the champions in winter and in an otherwise empty stadium, something that he believes will benefit the less experienced team.

“I think the crowd not being there is going to be a help to Meath’s younger players, definitely.

“A really good sign of their attitude was in the last two rounds of the league. They were already relegated but they played very well, put up good scores and created goal chances, a couple against Dublin and a couple against Monaghan. They didn’t take them all and I’d say they’ve been working on their finishing and that’s improved.

“They’re better prepared because of Division One, have a reasonably settled team and a bit of impact off the bench.”

Trevor Giles is thoroughly enjoying the championship and from personal experience, knows that it has provided a lift for people.

“I’m enjoying the knockout - it’s bringing me back to my own career and going out under serious pressure because things could go belly up at any stage and the season could be over.

“It’s the right format for the year that’s in it. You saw Kerry: you get hit with a late goal and there’s no time to recover. You’re gone. It’s stark. You couldn’t go back to it in the long term, doing all that training for just one match but I’m enjoying it at the moment.

“Chatting with patients (in his physiotherapy practice), talking about last week’s game and looking forward to next week’s. My Dad loves his football. He can’t come to see his grandchildren and he can’t play golf so the championship is keeping him going. I’ve had to change the batteries on my TV remote control last week because I was flicking from one channel to another!”