County suffered a dismal championship in 2020, losing to Galway and to Clare 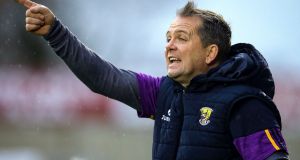 Davy Fitzgerald has confirmed that he will remain on as Wexford senior hurling manager for 2021.

His decision to lead Wexford for another year comes on the back of a disappointing championship campaign in which the county failed miserably in the defence of their Leinster title.

While clearly disappointed with their championship defeats to both Galway and Clare, Fitzgerald indicated following the loss to his native county that the players had said immediately following the game that they wanted him to remain.

Fitzgerald, having mulled over his future over the past 48 hours, text his players on Monday with his intentions to continue as manager, taking up the option on his second year, which will in all see him having held the managerial role for five years in total.

Having won a Leinster title last year, while also getting promoted to the top flight of the national league, along with two Walsh Cups, it was felt that Fitzgerald would not want to bow out on such a disappointing note of two desperately disappointing championship displays.

Following their loss to Galway, Fitzgerald was clearly angry with his players, saying “they threw in the towel.” While he felt there was improvement against Clare, he is still at a loss as to their sudden collapse in form.

Devastated with their loss, Fitzgerals still feels it’s not the Wexford he knows.

“I just cannot put a finger on it. The lads, for some reason, were just flat. I’m not making excuses but given the season that’s in it, it’s not the time to make judgements.

“We had the split season but Wexford is unique because we had players playing both hurling and football. Next year will be different, we will have a split season but one we will be able to prepare for differently, for it will be well informed.”

Looking back on their two games, Fitzgerald said: “I know there’s more in Wexford. That was not the Wexford we all know. We will reflect back, move on, and begin preparations for next season, which hopefully gets under way around the end of February playing right out to June or July.

“Hopefully, we will see a different Wexford. I’m confident we will. The squad will be looked at, there will be new players in and some out. We have had an incredible time, this championship apart which was disappointing despite having qualified for the league quarter-final which we couldn’t play.

“I’m confident we can return to those incredible days we experienced over the past three years.”