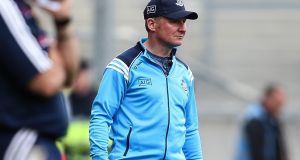 You can be certain Jim Gavin has an idea of where he wants to go and who he wants to use already when his main men like Cluxton, O’Sullivan and Connolly finally move on. Photograph: Gary Carr/Inpho

The list of genuine insights rationed out by Jim Gavin for public consumption is notoriously and deliberately a short one. We are used it by now and have broadly made our peace with reality.

While it may do us little credit that one of Gavin’s easiest and most comprehensive victories was over the GAA press, we do hang in there for whatever small nuggets come our way. We are not what you’d call dignified about our status.

And so it was that when he accepted the Philips Manager of the Year award in 2013, we noted down for future use something he said in his on-stage interview afterwards.

“After a game, the most satisfying moments are the few minutes together in the dressing room. It was just the players, the management team and some county board officers. It’s important to let the players bask in the moment. They should enjoy that time because it’s a special moment.

“I said to the players that we would probably be never together as a group in the same room again. Players get injured, retire, lose form so that is the case. Even for the medal presentation, one of the players was missing because he had an early start for work the next day.”

If that line about never being together as a group again felt stark at the time, it was mostly because you could imagine the players’ reaction to hearing it on the day. Yeah, thanks for that, Captain Buzzkill. And yet, it should probably come as little surprise that Gavin’s prophesy was correct.

We can’t say one way or another whether they’ve all ever shared a room but a look at Dublin’s playing line-ups over the past seven summers makes his point in a far more impactful way.

Dublin have won four All-Irelands since 2011, taking in five finals when you include last year’s replay against Mayo. Not a single one of the starting XVs from those five finals has ever been replicated in a subsequent championship game. After their day of days, the same team never started another game together.

We live in a world of interminable peacocking and drearily repetitive argument. In the to-and-fro that invariably follows another handy Dublin win, the general foreboding over a future in which the city team will eat the sport whole is usually countered by someone saying that this is a golden generation of players, unlikely to be repeated, maybe even in our lifetime. Problem is, the numbers don’t really bear that out.

The first part is very obviously true. Gavin has at his disposal a stunning crop of players – skilful, athletic, purposeful and tactically astute. The team that took the field against Monaghan in the quarter-final contained nine All Stars, for starters.

Of the six who don’t have a statue, John Small and Mick Fitzsimons were the man of the match winners in last year’s drawn final and replay, Con O’Callaghan is 1/8 for Young Footballer of the Year and Paul Mannion, Paddy Andrews and Eric Lowndes are serious operators in their own right. They were also able to bring on two former Footballer of the Year winners plus a four-time All Star in Paul Flynn. And do it all without Diarmuid Connolly.

As golden as a generation can be, then. But to argue that Dublin can’t or won’t keep producing as they go seems pretty disingenuous. You don’t even have to get into the fraught business of predicting the future to see it. Simple analysis of the present and recent past will point the way to where Dublin are going.

Others have come and gone but 14 of that group of 15 all togged out in the matchday panel three weeks ago and Costello will surely return when fitness allows. At 27, Cooper and Rock are the oldest of that cohort.

Gavin’s ability to oversee consistent transition will be remembered as the hallmark of his period in charge. In the winter of 2012, he took over a team that had won its All-Ireland the previous year and set about refitting it on the hoof. It has been a constant theme with each passing year. New faces tugging at older players’ coats, making them cranky, taking their place.

The upshot is that of the four teams left, Dublin fielded the youngest starting 15 in their most recent game. The average age of the side that trounced Monaghan was 26.26 And while Diarmuid Connolly’s return will raise that figure a touch, the Dubs will still trend in or around 18 months younger per player than Kerry and a full two years per player younger than Mayo.

However this year ends, Kerry and Mayo have transition periods ahead of them. Not only have Mayo the oldest team left, they have the one with the most games under them. Whereas Dublin started just four players against Monaghan who also started the 2011 All-Ireland final, Mayo had nine starters against Kerry last weekend who played in that year’s All-Ireland semi-final.

Of the under-21 team who claimed All-Ireland honours for Mayo in April 2016, only Stephen Coen and Conor Loftus made the match-day 26. Fergal Boland was on it all year but got squeezed out last Sunday. The generally unspoken desperation around Mayo’s All-Ireland quest this year is that the cliff’s edge is approaching. It takes a fair leap of the imagination to see them still matching strides with Dublin in, say, 2020.

As for Kerry, the rampant underage success of the past few years will presumably bear fruit eventually but there has been limited sign or sight of that crop so far.

For better or worse, Eamonn Fitzmaurice has been reluctant during his reign to field younger players – in five seasons, he has only given two championship debuts to players who were eligible to play under-21 that year. Maybe they will all come through in a burst and take the championship by storm. Under current management, that would be a significant departure from the norm.

By contrast, Gavin played four under-21s in his first championship game. He has never baulked at age. McCaffrey played in his first All-Ireland final at 19, Mannion and Kilkenny at 20, Fenton, Small and Byrne at 22. O’Callaghan has looked to the manor born so far this summer and it’s no certainty that he will be the one making room for Connolly’s return. If they come through tomorrow against Tyrone, history would suggest that Gavin won’t think twice about giving him a role in the final.

Critically, the Dublin manager has never been delicate about calling time at the other end either. For a while, it looked like the big imponderable over the coming half-decade or so would be how Dublin went about replacing their blue-chip players. But Gavin has been quietly doing it in plain sight all the while.

Michael Darragh Macauley was indispensable in the Dublin midfield until Fenton came along. Bernard Brogan was untouchable in the full-forward line until Mannion came back from his travels. Rory O’Carroll was the only footballer in the country to have been nominated for an All Star in each of the previous six seasons when he upped sticks and left at the end of 2015. Mick Fitzsimons has his place at the minute, Byrne is fighting him all the way for it.

On the Dublin bench the last day, there were more players over 30 than under it. Brogan, Macauley, Flynn, Eoghan O’Gara, Kevin McManamon, Darren Daly – these are players who have the bulk of their work done at this stage. They won’t all go at once and they may not even go all that particularly soon. But Gavin won’t be scrabbling around for their replacements when it happens.

Filling the boots of Stephen Cluxton will be a trickier proposal, as will finding new faces when Connolly and Cian O’Sullivan move on.

But anyone watching the Dublin under-21s win their All-Ireland earlier this year saw first-hand the coaching that has gone into Evan Comerford between the sticks and with the likes of O’Callaghan, Conor McHugh and Colm Basquel already up and running, Dublin aren’t going to be short of forwards anytime soon.

They won’t all be Diarmuid Connolly and yes, that might turn out to be the difference in time. But – and this goes for O’Sullivan too – Gavin’s plan will shapeshift according to his needs. O’Sullivan is the key to the Dublin defence right now but even as recently as 2014, he was flitting between defence and midfield as a jack of three or four trades.

You can be certain Gavin has an idea of where he wants to go and who he wants to use already when his main men move on. Everything he has done so far tells you that must be the case. In that respect, it’s not so much the golden generation that ought to have the rest of the country fearing for the near future. Or even the ones to come.

It's the quietly-spoken pilot overseeing it all.

1 Klopp to rest Lallana to ensure he remains fit for transfer
2 Pete Sampras: The forgotten great with the best serve in the business
3 Sarah Rowe unfazed by uncertainty women’s AFL return
4 Game Changers: Vincent O’Brien, a pioneer who took Irish racing to the world
5 Chelsea jump up to third but not without a scare at Palace
Real news has value SUBSCRIBE