The real Colm Cavanagh now standing up for Tyrone 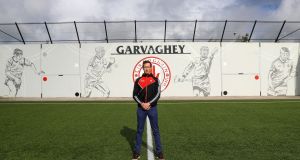 Colm Cavanagh at Tyrone GAA HQ in Garvaghey: “I think we are in a good enough place at the moment to take on Dublin.” Photograph: Declan Roughan/Presseye/Inpho

Everything about meeting Colm Cavanagh in person stands up straight against the Tyrone footballer he has now become. Calm, modest and unassuming, and yet with a natural and deliberate presence that speaks perfectly loudly enough for itself.

And yes tall, though not quite as burly as his older brother Seán, but at 6ft 4in he is a couple of inches taller. Now aged 30, he is one of the standout players for Tyrone this summer – and in some ways stepping out his brother’s shadow, too.

Seán continues to drive this Tyrone team from the front, embracing his captain’s role in the process, while Colm takes a back seat, though certainly not playing the passenger. Watching, observing, he’s taking in the bigger picture and influencing it too – starting around midfield and frequently shifting to the edges of his own defence.

And if he doesn’t get that All Star nomination this year...

Mickey Harte has described Cavanagh’s performances this summer as “gold dust” – particularly the Ulster final win over Down, and All-Ireland quarter-final win over Armagh.

That description is usually reserved for his older brother, and Harte clearly sees the younger Cavanagh in a similar light now, and for good reason, a manipulator of every play and a master of the turnover.

If Tyrone are to halt Dublin’s long run on Sunday – they are unbeaten in the championship since the 2014 semi-final – then both Cavanagh brothers will have to play their leading role. It may not be a coincidence that Seán is also playing some of his best football this summer in this his final season with Tyrone, but there is an undeniable synergy between the brothers which only now may be at the peak its powers.

“Personally I’m feeling good, and have never felt as strong and as fit,” says Colm Cavanagh, standing tall outside the Tyrone GAA centre at Garvaghey.

“And I think that’s testament to the guys who have got the team as a whole in as good a shape as they have been.

“And I’m just really enjoying it. I think we are in a good enough place at the moment to take on Dublin, but you can only analyse afterwards whether we were in a good position or not. The mood in the camp is good, everything is positive, we’re all looking forward to the challenge that Dublin will bring.”

He’s not giving much away, in other words: Cavanagh has been through enough to know this current Tyrone team has some way to go before it can be judged against the team of former glory – because he was part of that too.

Part of the 2008 All-Ireland-winning team in what was his second season, coming on in the final win over Kerry, Cavanagh has also endured his unfair share of injuries: concussion in that debut season in 2007, then a dislocated ankle and shoulder – both of which required surgery – plus a variety of minor breaks and deep scars (some of which can still be seen on the side of his face).

He doesn’t feel there is anything different about playing alongside Seán in his last season, because if there is it’s purely a subconscious thing.

“We don’t really talk about it, and I don’t think about it too much. He [Seán] has probably accepted that this will be his last year, whether he likes it or not, but we don’t really discuss that. I think he has enjoyed this campaign the most of the last number of years. You can just see it in him, that he is really loving coming to training and going to the gym.

“That’s great to see, because I think last year, even leading up to the Mayo game, I didn’t see him doing the things that he is doing this year basically so he is enjoying it. He will probably look back in years to come whenever he does finish and maybe look at things and that but at the minute he is just living the moment and enjoying it.”

That quarter-final defeat to Mayo last year still rankles a bit. Their last championship defeat to Dublin in 2011 is a little more distant now, yet Cavanagh is clearly seeing Sunday’s game as the challenge Tyrone need and want to prove they have progressed from last year.

“We have racked up some good scores and won convincingly some days out but if you were to sit down and analyse the games we have been far from perfect in all the games. To beat the likes of Dublin it probably wouldn’t be good enough the way that we have played to date to get over the line.

In his early years, Cavanagh was seen as somewhat unpredictable; now he is seen as one of the most reliable Tyrone players. He’s happy to share some of that experience on match day – especially when it comes to Croke Park.

“I suppose I try to instil any sort of wisdom that I have gained over the years to the lads. Personally I wouldn’t be the biggest talker in the changing rooms but when I get out onto the pitch I would try to keep the boys on their toes because there is no time for taking breaks in this game in the modern day as there is so much energy required. I try to talk to the younger lads as much as I can and pass on wee bits of advice.”