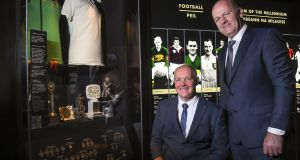 Jack O’Shea, Kerry’s outstanding centrefielder of the Mick O’Dwyer era, says he doesn’t expect there to be much change in Saturday’s All-Ireland replay between his own county and Mayo.

O’Shea was speaking on Thursday in Croke Park on the occasion of his induction into the GAA Museum Hall of Fame. He said when asked that he wouldn’t be surprised if Mayo repeated the much-discussed switch of Aidan O’Shea to full back to mark Kieran Donaghy.

“No, I don’t think so. I think a lot of things mightn’t change. Kieran Donaghy is doing very well and he did very well the last day. People say Aidan O’Shea might be better out the field but Mayo played very well up front. If Aidan O’Shea had been up front, would the ball be going in as quick into Andy Moran and the rest of the full-forward line? That’s a question.

“I think he did a job, to a degree, but I think Donaghy did really well, as well. But I wouldn’t be surprised if he was still at full-back.”

I think he has a good game plan for Dublin but has to win the semi-final first.

Reflecting on Kerry’s problems in their own full-back line, O’Shea said defensive problems frequently start farther out the field.

“A full-forward is only as good as the ball coming in. I think that is where Kerry had a problem the last day. They weren’t able to put enough pressure on the ball coming into Andy Moran. Likewise, the ball going into Donaghy, pressure has to be put on that. If the proper ball goes into a full-forward, the full-back has no chance, no matter who he is. If you had three Aidan O’Sheas there, it wouldn’t make a difference.

“He was always going to stop the aerial threat that Kerry might have had but, on the day, Kerry didn’t use that. It wasn’t a day for the big high ball going in, and you could see a totally different thing the next day.

“I don’t think Kerry will ever play a sweeper. I just think you might get a player that drops without playing a sweeper role. You can still be very effective without playing a full sweeper role, if you can get somebody to drop into positions. They just have to be wary of that, that Mayo can’t come forward as much and as freely as they did last Sunday.”

With the outcome on a knife-edge, O’Shea believes Eamon Fitzmaurice has concentrated much of his thinking this year on how to counter Dublin, a contingency that may never come into play if Kerry can’t survive the replay or Tyrone get the better of Dublin.

"I think Eamon Fitzmaurice has been putting a plan together for Dublin. I’d be very confident if Kerry were playing Dublin that they could pull it off. I think Eamon Fitzmaurice has planned for Dublin and he has a game plan. I think you’d see players playing against Dublin who you wouldn’t see playing against Mayo. There’s a plan in place but can they get that far? That’s the problem.”

He said that April’s league final win over Dublin – Fitzmaurice’s first win over Jim Gavin’s team at Croke Park – had been of major significance.

“Huge. Even in the league game in Tralee you could see that he’s been bringing the Kerry team on and trying different things. I think he has a good game plan for Dublin but has to win the semi-final first.”

He acknowledges that the champions won’t have things all their own way in Sunday’s semi-final and sees this year’s race for the Sam Maguire as exceptionally hard to call.

“I’ve been very impressed with Tyrone. They were very good in the Ulster final and they were very good the last day and very mechanical in the way they are working. Everybody knows what they have to do. They are going to take a lot of stopping and they are really going to put it up to Dublin.

“I think if Dublin can’t score from outside 35 yards, they will find it very hard to run up a good score against Tyrone. It will be a really tight contest and any of the four teams are capable of beating each other.”

Kerry will need to find improvement on Saturday. O’Shea believes they have room to do so and points out that injury didn’t help with the drawn match, as they were missing former All Star Donnchadh Walsh. He feels that 2014 Footballer of the Year James O’Donoghue may not even start the replay.

“James has had a problem with injury in the last number of weeks. If Kerry don’t start him on Sunday I wouldn’t be surprised, he’s struggling. He was very good against Cork down in Killarney, but again Kerry were so dominant in that game and there was always good ball coming into him. I do feel he’s been carrying an injury and we haven’t seen the best of him yet.”

One player he’d love to see available on Saturday is Kerry minor captain David Clifford, who he says is the best he’s seen at the grade.

“I think he could play next Saturday. If I had the chance, I’d play him! He’s old enough, he’s big enough, a phenomenal talent – probably the best I’ve ever seen at his age and his attitude is very good. I’ve a good feeling that he won’t go to Australia, even if he’s offered to go. I think he wants to stay in Ireland and play for Kerry.”

The GAA Hall of Fame inducted a further four members on Thursday. In a presentation ceremony at the Croke Park museum, O’Shea, Frank Cummins (Kilkenny), Pádraig Horan (Offaly)and Matt Connor (Offaly) became the latest to join what is now a group of 46 players, honoured in a special display in the museum.

Cummins won eight All-Ireland medals, from 1969 to 1983 (when he was also named Hurler of the Year), in a glittering career in the Kilkenny centrefield. Horan captained Offaly to a first MacCarthy Cup in 1981, adding another four years later and managing the county to a first national league title in 1991.

O’Shea won seven All-Ireland football medals at centrefield with Kerry, including the 1978-81 four-in-a-row and three successive titles from 1984 to ’86. He was also Footballer of the Year an extraordinary four times. One honour that eluded him was the five-in-a-row, which Offaly memorably prevented in 1982.

On that team was a player frequently mentioned as one of the greatest forwards in football history. Matt Connor’s career ended at 25 after a car accident. The Walsh Island man kicked seven points in Offaly’s famous 1982 final win.