What changed for Mayo after the Roscommon draw?

Roscommon defender David Murray breaks down what Mayo, and Andy Moran, do well 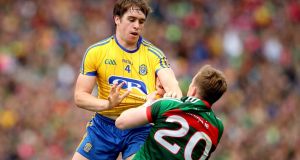 Roscommon’s David Murray and Mayo’s Donal Vaughan get to know each other. Photograph: Ryan Byrne/Inpho

Even before Patrick Durcan’s late equaliser last Sunday, Mayo had ridden their luck to still be in this year’s championship.

Two extra-time wins, before taking 140 minutes to get past Roscommon in the quarter-finals. In fact, Roscommon left the drawn game behind them, seven points up within 13 minutes and on the front foot for much of the remainder.

But Mayo came out for the replay – without talisman Lee Keegan – a team transformed and won by 22 points. With that their season kicked off for real, but what changed?

“In the replay, they were a lot more clinical when they got the ball in the final third,” explains Roscommon defender David Murray.

“In the drawn game we seemed to get a lot of opportunities to force turnovers by getting numbers around their attackers to force an overcarry. But in the replay, they moved the ball with more speed, made the right decisions and were very clinical in their attack.

“When we were committing to tackles in the first game, turning Mayo over in possession was a lot more likely. Conditions probably did have a bit of an influence but I felt that the main difference was that there were a lot more options for the man in possession, with runners coming from deep off the shoulder.

“When we were tackling in numbers in the drawn game, it was often against an isolated Mayo attacker, but in the replay there was support there allowing them to get a pass off and continue the attack.”

They returned re-energised. More clinical, with a higher press and intensity levels amplified

Mayo lost their stranglehold on the Connacht championship last summer when Galway shocked them at the semi-final stage. They were expected to make amends at the same stage this year, but failed to do so. That defeat was followed up by an extra-time win over Derry, a win over Clare and another extra time victory against Cork. They were fortunate to get a second day at it against Roscommon, but given that chance they returned re-energised. More clinical, with a higher press and intensity levels amplified.

Pádraig Pearses clubman, Murray – in the ninth of his 10 senior championship starts since making his debut against Cavan in 2015 – was part of a backline that held the six Mayo forwards and substitutes to 0-4 in the drawn game.

“In the drawn game, we were happy with the intensity we brought. We managed to get in some big tackles, get some good steals and turned them over. That’s something we struggled to do in previous games against Mayo. The area we felt we could have improved most for the replay was probably the execution of a lot of our plays which came down to some errors in basic skills that we knew we could’ve done better with.

“Another one of the things that we managed to do well was get away our kick -outs. The Mayo press probably wasn’t as strong as we would have expected on our kick-outs so we had a chance to get some decent possession early in the game and launch some attacks from there. Even in the full-back line there seemed to be that yard or two of space allowing us to make ourselves a good option for Colm [Lavin].”

Ever dependable, tenacious in the tackle and polished in possession, if Murray says Mayo were pressing hard, they were pressing very hard.

“This was one of the major differences in the replay, that press was a lot stronger and we struggled to create the options for Colm to get off our kick-outs and get our hands on primary possession. Without primary possession, it was very hard to implement our attacking plan we had worked on.”

The tigerish corner-back missed Roscommon’s opening game of the summer against Leitrim through injury. He returned however for the Connacht final win over Galway, keeping Michael Daly scoreless in the first half before doing likewise on Danny Cummins after the change-of-ends.

In the drawn game against Mayo, the 23-year-old picked up Andy Moran and the two had a right tussle. Against Kerry the veteran was on fire, scoring 1-5 from play – he has 2-20 (play) already this summer – so what makes him so hard to handle?

“His movement is very good for an inside forward, and I found he uses his body in a way that makes it very difficult for a defender to get a hand in and disrupt the pass when the ball is kicked in. He’s very strong when he gets the front position.”

Mayo’s draw last Sunday set up their ninth game of the summer, their second replay, but this time it’s Kerry who were the more fortunate to get another crack at it.

“I think it will be another tight game, it’s tough to call. If Mayo can continue to create goal chances as they did last weekend and be a bit more efficient in taking them, I think they might win. Mayo by two points.”

As for Roscommon, after a disappointing league campaign they bounced back with a record championship win over Leitrim, before having nine points to spare in the Connacht decider against Galway.

This year's Nestor Cup triumph added to the minor and two Under-21 Connacht titles (and a Division Two league title) already to Murray's name. But by how much was the season tainted by that Mayo demolition?

“The year overall ended extremely disappointingly. Winning the Connacht final was of course a good achievement for us but once we did it, as a squad we were all really focused on winning the All-Ireland quarter final and getting to the last four.

"Going out at the quarter final stage was disappointing, especially with our poor performance in the replay, but it was definitely a year that we have learned a lot from and we’ve a lot to build on going forward.”