Ballymun manager could be set to succeed Rory Gallagher 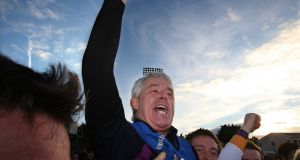 Paddy Carr, the current manager of Ballymun Kickhams, has become the latest name to be linked to the vacant Donegal post.

Carr, who was interviewed for the job in 2014 before Rory Gallagher was appointed, is understood to have the support of his native Fanad Gaels club in the county.

Fanad Gaels nominated Carr, who is based in Meath, for the post in 2014 and are expected to do so again similar if decides to put his name forward. The closing date for application is August 26th.

It is believed that Carr, who led Kilmacud Crokes to an All-Ireland title in 2009, has already been approached by at least three other clubs also willing to back his candidature.