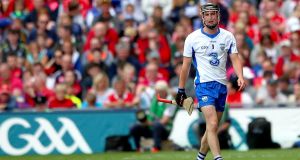 Conor Gleeson will miss the All-Ireland hurling final after he was shown a red card in Waterford’s semi-final win over Cork. Photograph: James Crombie/Inpho

Waterford will not take Conor Gleeson’s disciplinary process any further, having failed to get his red card downgraded to a yellow at the CHC on Monday night. The midfielder will now miss the All-Ireland final after his strike on Patrick Horgan at the end of the semi-final two weeks ago.

“We spoke in advance of the hearing last night and we spoke about possible outcomes in advance,” said Derek McGrath. “And I won’t say we’ve exhausted every outcome, but we’ve made a decision as a management - and player - to leave it at that now. That’s basically it. We’re concentrating on the game as such.”

Having pushed Tadhg De Búrca’s suspension to the bitter end, the temptation for McGrath may have been to push Gleeson’s as far as they could. But the Waterford manager stressed that the two situations were different.

“We accept that, but I’d have spoken to Conor about the different circumstances, there are different circumstances with each case. The loco parentis issue, the duty of care, I was up with his mother yesterday and they’re very supportive of the stance we felt we should take, which is to go to the first hearing, see how that goes, and our approach then was to get the red reduced to a yellow in terms of the infraction.

“When that wasn’t going to be successful as a result of last night, we felt it was a case of a different scenario to what Tadhg faced. That was the reasoning behind it, rather than a duty of care to the players. These fellas are well able to accept that each situation is different, we’re moving on to look forward to the All-Ireland.

“The infraction only came in the post last Wednesday evening, so we had discussed it beforehand with Conor and the county secretary, Pat Flynn, in terms of an appeal or not. We felt it was worth an appeal but it was a different set of circumstances in terms of the incident. Our argument was based on downgrading from red to yellow, that was our approach; we were unsuccessful in that and while we’re disappointed for Conor - he’s gutted, himself - there’s no scenario where Tadhg got treatment in going to the DRA that Conor isn’t getting. Each circumstance is its own entity.”

Gleeson will be a huge loss from the Waterford midfield, as McGrath conceded.

“Massive loss to us. He performed key roles in the last three or four games. He did well on Richie Hogan against Kilkenny, did well on Shane Dooley and Joe Bergin against Offaly, against Conor McDonald with Wexford and on Conor Lehane the last day. He’s been assigned key tasks, so he’s a very significant loss.”

McGrath will, of course have the other Gleeson available for the final, talisman Austin Gleeson having faced no further action for his helmet pull on Luke Meade in the same game. While most of the country seemed to take it as inevitable that Gleeson would miss the final, McGrath says he was always confident he would be available.

“I wasn’t worried, I was aware of the conversations that were taking place outside when immediately leaving Croke Park. But when it wasn’t part of what had happened, given the route we’d been down with Tadhg in terms of the referee’s report being sacrosanct and all the judicial learnings from the two weeks previous, which the management had immersed itself in behind the scenes, I was confident from the outset.

“I was confident based on conversations which had taken place with our own on-field players in terms of bringing back information as per conversations between referee and linesman. I was confident an adjudication had been reached on the given day. Having experienced the laws of the GAA over the last two weeks, the language being used was allowing me to concentrate on the All-Ireland.”