GAA statistics: Stephen Rochford is a risk taker, for better or worse 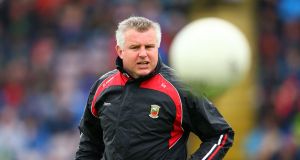 What must the Mayo squad think of their manager Stephen Rochford. Brave? Ruthless? Tactical genius? A chancer?

Since taking over Mayo ahead of the 2016 season, Rochford has overseen two rollercoaster campaigns. The second of which is still only at the semi-final stage. Their stranglehold on the Connacht championship has been lost, twice beaten by Galway, but they have won 11 championship games. Losing by the minimum in last year’s All-Ireland final replay, they are 70 minutes away from returning to the same stage.

Inevitably, Mayo will win or die by his big calls

They say insanity is doing the same thing over and over again and expecting different results. Rochford has no intention of bowing out with “what ifs”. Ahead of their 11th All-Ireland semi-final since 2004 this Saturday; surely they are energised by a man who not only backs them to adapt and deliver, but backs his own instincts too.

And inevitably, Mayo will win or die by his big calls.

In the 2015 championship Mayo conceded nine goals in five games. As had been the case in the years previous, the concession of goals was killing them.

So, in his first big test as Mayo manager, Rochford brought Kevin McLoughlin back from the forward line to sweep in front of his fullback line against Galway.

“The poor man, he was about as useful as a lighthouse in a desert,” claimed Pat Spillane. Mayo lost, they allowed a defensive-minded Galway an extra defender, and scored only 0-5 from play. Galway scored 1-9 from play (0-4 from their fullforward line).

Inevitably whatever had changed from the previous five years, when the Nestor Cup was draped in green and red, was to blame.

The Knockmore man, however, was persisted with – he made 12 interceptions over the summer, and Mayo’s goal concession dropped to six in nine games (a goal conceded in 67 per cent of games, down from an average of 1.8 goals per game in 2016), including their two own goals against Dublin.

Alan Dillon was handed a rare start in last year’s quarter-final win over Tyrone. His first time in a Mayo championship XV since the 2014 semi-final replay against the Kingdom.

This wasn’t exactly a form selection however. Against Tyrone’s advanced defensive system, Dillon floated around the middle of the field as a link man, as his marker dropped deep. The veteran collected 13 possessions in the first 20 minutes of the game. Everything went through him, unmarked.

Tyrone were forced to take off the experienced Justin McMahon and brought on Rory Brennan after just 21 minutes. After this, Dillon touched the ball just twice, as the athletic Brennan pushed up on him and looked menacing on the overlap. At half-time Donal Vaughan went to centre forward as Tom Parsons replaced Dillon. Tyrone’s double-sweeper gone, and some damage done. Mission accomplished.

Barry Moran’s one and only start under Rochford came against Tipperary in last year’s semi-final – his first start since the 2015 semi-final replay defeat. Moran was asked to drop back from midfield and sweep in front of Michael Quinlivan and Conor Sweeney, to curb their aerial threat following their quarter-final demolition of Galway.

The duo managed just 0-2 from play between them. Moran had played as a sweeper previously, but this demonstrated that Rochford had no problem resetting his stall to counteract the opposition. Of the six balls Tipp kicked long and high that day, Moran won three of them. The problem however came when the Castlebar Mitchels midfielder had to push back up for kickouts and throw balls.

The most talked about call of the Mayo manager’s reign came ahead of last year’s All-Ireland final replay. Rochford decided he needed longer kickouts, and so he brought in Rob Hennelly ahead of eventual All Star David Clarke.

Hennelly had been dropped after the Connacht semi-final, with Clarke given his chance in the qualifiers. Yet despite being one of the country’s most talented ‘keepers (they both are), Hennelly struggled. It was his first game in three months and two weeks, in the most pressurised position on the field.

In the drawn game Mayo had won 15 of their 20 kickouts, with Clarke’s final three providing some really nervous moments. With Hennelly between the sticks they went longer more often, and overall won eight of his 14. Luck was not on his side however. His two big mistakes led to Lee Keegan’s black card (and a resultant Diarmuid Connolly point), and a converted penalty (along with his own dismissal on a black card).

Before Rochford went tinkering with his fullback line he went and messed with midfield. In the past he had played halfback Donal Vaughan at midfield, but in the drawn quarter-final against Roscommon he went a step further. Lee Keegan was given a man-marking role on the Rossies’ main midfielder Enda Smith, meaning that aside from their ding-dong, there was just a man apiece left actually playing in midfield.

He was at it again against Smith, outscoring his man 1-3 to 0-1, he also managed to avoid the aerial contest against a much taller opponent.

In the second half Roscommon pushed Smith into the full-forward line and Keegan followed, skewing the formations further. Despite the genius of his initial matchup, Rochford was criticised for allowing his main man to be taken out of the game in the second period.

Both this year and last year the Mayo manager has opted to go without the team’s regular fullback from the All-Ireland quarter-finals onwards. Last year it was Kevin Keane, and this year a fit again Ger Cafferkey, have had makeshift alternatives preferred to them.

Since Sunday’s draw Rochford has been widely criticised for putting his centre forward Aidan O’Shea back on Kerry full forward Kieran Donaghy. The man who has raised hell against them for over a decade. This, however, was not O’Shea’s first experience in the role. Rochford moved him there to deal with Michael Murphy against Donegal in the league, and he played the guts of 25 minutes on Kevin Feely and then Tommy Moolick against Kildare last summer.

On that occasion, O’Shea won one high ball in around the square and lost another. Six times, O’Shea was lost as the ball was kicked into his man. He made two surges forward, assisted a score and lost the ball on the other occasion. He struggled to get back into position both times. Mayo won easily, however, so it must’ve worked, right? That’s how it tends to go.

Last Sunday, Mayo did not win, and O’Shea was again not the perfect fullback. The two high balls that came between himself and Donaghy he dealt with excellently. The fire with fire approach that Rochford wanted did work. A Donaghy catch would’ve deflated Mayo, instead O’Shea was inspiring them.

However, on the ground, Donaghy assisted 1-1 and scored a point himself. Many of Donaghy’s possessions were on the peripheries of the attack as O’Shea switched off and stood off. But he had two more missed shots, and gave the lay-off for a missed 1-2. The two Kerry goals though were the result of a loose Séamus O’Shea handpass, and an overhit Keith Higgins pass, not the full back’s positioning.

O’Shea, who often plays at centre back for his club, had 24 touches in comparison to Donaghy’s 20. In the second half his initial bursts out of defence led to three scores. The gamble paid off in as far as it was expected to.

Noted, Aidan O’Shea was not 100 per cent fit, but the omission of the Breaffy bomber and Colm Boyle for Mayo’s loss to Galway this year was questionable. The duo are the fulcrum of Mayo’s physical approach. Of the 50 championship games Mayo have played since O’Shea’s debut in 2009, it was only the fifth in which he did not start.

The others were against Leitrim, London or Sligo. It was Colm Boyle’s first game on the bench since his return to the fold in 2012. Big calls, wrong calls.

Under Rochford’s tenure Boyle has started and finished just five games (of 17), and his average minutes played is 58. Andy Moran is another. Despite starting and scoring in Mayo’s last 13 games, before Sunday he had not started and finished a championship match since the 2012 Connacht final. He’s scored 2-20 from play this summer and has an average of 0-3 per game under Rochford.

Boyle’s heart-on-sleeve approach, and Moran’s age and injury history, mean they cannot finish every game. But the switches are bordering on habit, and Mayo need these two on the field for as long as possible with everything at stake.