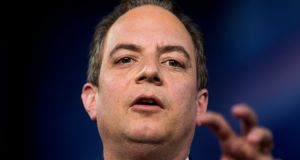 The White House made a messy attempt on Sunday to control public perceptions of a widening scandal over alleged contacts between aides to Donald Trump and Russian intelligence officials during the 2016 election, alleging that the FBI had dismissed reports of such links.

The scandal has shown little sign of coming under control, with a Republican congressman calling for an independent inquiry, multiple congressional committees pursuing investigations and Mr Trump escalating a war with the media in an apparent attempt at distraction.

While the White House has, by its own clumsy admission, been working behind the scenes to try to manage the conduct of Congress and intelligence agencies in the scandal, those efforts have so far backfired.

Contacts between the White House chief of staff, Reince Priebus, and top FBI officials have come in for particular criticism as a violation of a necessary line separating the White House from justice department investigations with potential targets inside the administration.

On Sunday, a Trump spokeswoman once again tested that line, saying the FBI had dismissed allegations of inappropriate Trump-Russia ties as “BS” – bulls**t.

“The FBI has already said this story is BS,” Sarah Huckabee Sanders said on ABC’s This Week. “Those were their words, so I apologise to my mom. But literally those are the words of the FBI, that the story is BS.”

The FBI has in fact made no public comment on its investigation into alleged contact between Trump associates and Russian operatives, which was first reported two weeks ago by the New York Times and CNN, citing anonymous law enforcement and intelligence community sources. The labelling of the story as “BS” has been attributed to the FBI’s deputy director, Andrew McCabe, by anonymous administration officials.

The White House press secretary, Sean Spicer, has confirmed that Mr Priebus had asked top FBI officials to publicly debunk the matter, which they declined to do.

Under fire, Mr Trump has lashed out on two fronts. The president attacked the intelligence community over the story, warning that the sources of the leaks that fed the news reports would be punished. But he saved his sharpest attacks for the media, which he called “enemies of the people” in a speech to the Conservative Political Action Conference.

That line of attack was redoubled on Sunday by Ms Sanders, who is the daughter of former Arkansas governor and presidential candidate Mike Huckabee.

Mr Trump himself tweeted that the Russia story was “FAKE NEWS” put out by the Democrats.

White House attempts to write the story off as a confabulation were undermined, however, by expressions of alarm on Capitol Hill. In an appearance on HBO on Saturday, Republican congressman Darrell Issa, a fiercely partisan warrior, called on the attorney general, Jeff Sessions, who was a member of the Trump campaign, to recuse himself from justice department investigations of the affair.

“You’re going to need to use the special prosecutor’s statute and office,” Mr Issa said. “You can’t just give it to your deputy. That’s another political appointee.”

Former CIA director John Brennan, who served in top intelligence roles under presidents Barack Obama and George W Bush, said on Sunday investigations of the Trump-Russia affair were in the early stages and that no one yet knew where the facts would lead.

“Anybody who claims that the facts are already known in terms of what did or didn’t happen between Russian officials and US persons during the election, I think is speaking very prematurely,” Mr Brennan told CBS’s Face the Nation.

“And the White House needs to understand that the interaction with the FBI on criminal investigations is something that really they need to steer clear of.”

Mr Brennan defended the FBI director, James Comey, one of the officials acknowledged to have spoken with Mr Priebus about the White House request to deny the story of links between the Trump campaign and Moscow.

Mr Brennan said he doubted whether Mr Comey would have spoken with Mr Priebus about the progress of the FBI inquiry.

“It’s been my experience, working with Jim, that he wouldn’t do anything to compromise the integrity of an ongoing investigation,” he said.

Mr Comey’s impartiality came under question, however, when he made a double announcement in the final weeks of the election that the FBI had opened a new thread in its investigation of Hillary Clinton’s emails and, subsequently, found nothing.

Mr Brennan also denied that he himself was a source for leaked reports of contacts between Trump associates and Moscow, including reports that former national security adviser Michael Flynn had inappropriate conversations with Russian diplomats.

“Anybody who thinks I’m responsible for that are dead wrong,” Mr Brennan said.

Mr Trump blamed Mr Flynn’s exit on his “unfair” treatment at the hands of the media, and the president has spent days advancing the media as a culprit for his administration’s woes. A poll released on Sunday by NBC News and the Wall Street Journal put Mr Trump’s favourability rating at a historic low of -4 points, compared with +30 and more for previous young presidencies.

It is unclear, however, whether the media is much more popular, a fact Mr Trump used during his campaign and now uses to sow doubt about damaging stories.

As spokespeople were deployed on cable news to attack the media on Sunday morning, the president tweeted an attack against the New York Times and a television commercial the newspaper planned to run during the broadcast of the Academy Awards.

“For first time the failing @nytimes will take an ad (a bad one) to help save its failing reputation,” Trump wrote. “Try reporting accurately & fairly!”

The ad asserts that “The truth is under attack. The truth is worth defending.” It’s unclear what Trump meant by “for first time” – the newspaper has created many television ads in the past.