Huge turnout in Moscow for march in memory of Boris Nemtsov 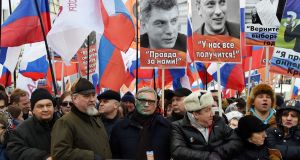 Thousands of people marched though Moscow on Sunday in memory of Boris Nemtsov, the Russian opposition leader, who was shot dead in a daring contract killing near the Kremlin two years ago.

Nemtsov, a charismatic, liberal politician, served as deputy prime minister under Boris Yeltsin, Russia’s first president, but fell out with the authorities after Vladimir Putin came to power in 2000.

The start of the march in Moscow on Sunday was delayed after police shepherding participants through security gates, ordered activists to roll up banners saying “Putin is war”.

Undeterred, Mr Kasyanov remained at the head of the march which wound its way peacefully along Moscow’s boulevards in bright sunshine with participants chanting “Down with Putin” and “Russia will be free”.

As always at Russian opposition events, police were out in force, but security helicopters that usually roam the skies observing political demonstrations were oddly absent. “They can’t afford the fuel to fly them any more,” quipped one pensioner. “I wonder how the authorities are taking photographs of us.”

Some people carried cardboard replicas of the Russian flag shot through with five holes representing the bullets a gunman pumped into Nemtsov’s back as he walked home across a bridge that spans the Moscow river near the Kremlin on the night of February 27th 2015.

Five Chechen men accused of killing Nemstov went on trial at a Russian military court last October, but an investigation of who ordered the crime has been slow and inconclusive. All of the five defendants appear to have links to Ramzan Kadyrov, the macho leader of Chechnya, who has sworn loyalty to Putin and frequently threatened the Russian president’s opponents.

Nemtsov’s assassination dealt a terrible blow to Russia’s struggling opposition movement and to the prestige of the country’s political elite. At the time of his death Nemtsov was preparing to release a report that he said proved that Russian forces were secretly fighting alongside pro-Kremlin separatists in east Ukraine.

Moscow police estimated that 5,000 people joined the march in Moscow on Sunday, but independent observers put the number at over 15,000 — more than three times as high. Many participants moved on after the event to lay flowers at the bridge where volunteers have been guarding a makeshift memorial at the spot where Nemtsov was killed for the last two years.

Dadin, who earlier claimed he had been tortured by prison staff, pledged on Sunday to continue to battle for human rights in Russia.