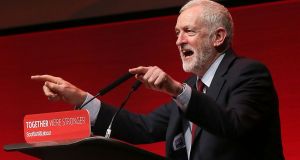 Labour leader Jeremy Corbyn: “Now is not the time to retreat, to run away or to give up.” Photograph: Andrew Milligan/PA Wire

UK Labour leader Jeremy Corbyn struck a defiant tone on Sunday, urging is party to unite following last week’s byelection defeat in Copeland, which has revived questions about his leadership. He told a Scottish Labour conference in Perth that, while he accepted his share of the blame, he would not bow to pressure to step aside.

“Now is not the time to retreat, to run away or to give up. Did Keir Hardie give up the fight? Did Clement Attlee? Did the miners, who fought for better pay and working conditions from the first days of the mining industry? They fought back and won time and time again to make their lives, and all the rest of us who came after them, better. That’s what we all have to do now and that’s what I will be doing,” he said.

Mr Corbyn delivered his rallying cry to a sparsely populated hall and his call for unity found little resonance among party colleagues who fear that the historic loss of Copeland could be a grim harbinger of things to come. The Conservatives’ capture of the seat was the first byelection gain for a governing party since the Falklands War and has left many Labour MPs in the north of England feeling more vulnerable than ever.

Labour’s deputy leader Tom Watson on Sunday rejected calls for a challenge to Corbyn’s leadership, but warned that “things have to change” for the party to have a chance of winning the next general election.

After last year’s failed attempt to unseat their leader, most Labour MPs are now resigned to Mr Corbyn remaining in place until he chooses to go, or he loses the support of his allies on the left. They can draw some comfort from the party’s success in fighting off a challenge from Ukip to retain a seat in Stoke-on-Trent last week.

Ukip leader Paul Nuttall’s failure to take the seat has unleashed a fresh round of bloodletting within his party, and raised questions about its future as a political force. Arron Banks, one of the Ukip’s biggest donors, on Sunday threatened to pull his funding unless he is made chairman and allowed to purge the party of some of its members.

He called for the expulsion of Ukip’s only MP, Douglas Carswell, accusing him of plotting to prevent former leader Nigel Farage from receiving a knighthood.

“I am giving Paul Nuttall an ultimatum that either I become chairman and sort out Ukip by bringing in business people and professionals to make the party electable, or I am out of there. The party cannot continue to be run like a jumble sale,” Mr Banks told the Sunday Express.

“These dullards aren’t bringing in Tory votes, Stoke proved that, so what are they for? The party now needs to bring in serious people to fix its ramshackle administration, stay relevant, and stay radical or it will die. From what I hear, far from winning elections, Carswell’s main concern is sabotaging Nigel’s knighthood, which is why he must leave the party.”

Mr Carswell, who has long been estranged from Mr Farage and Mr Banks and opposes Ukip’s emphasis on controlling immigration, ridiculed the suggestion that he was the source of the party’s troubles.

“It’s all the fault of that pesky Carswell! Coming over here. Winning our parliamentary elections,” he said on Twitter.