Hollywood loves Oscar, but will Trump be happy with back-seat role?

America Letter: On the Walk of Fame, the Trump star once had a wall built around it 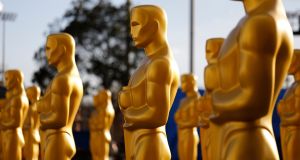 The Oscars are coming, but will Donald Trump be watching . . . and tweeting? Photograph: Monica Almeida/New York Times

It’s Oscars time this weekend, and there are two questions on everyone’s lips. One is if La La Land will sweep the board after securing 14 nominations. The other is whether Donald Trump will live-tweet the event.

After all, the president has form. As a private citizen, Trump was an avid tweeter during the annual Academy Awards ceremony, sharing with the world his artistic judgments and insider insights as one of the creative brains behind the television show The Apprentice.

In 2014 he forewarned his followers: “By popular (extremely) demand, I will be live tweeting the #Oscars2014 on Sunday night. Tell all your friends I will not be pulling punches!”

The Donald did not disappoint. “This cannot be the Academy Awards #Oscars AWFUL!!!!!!!!!!!!!!!” he tweeted. Even the singing left a lot to be desired: “Judy Garland was much better to put it mildly!”

Trump again provided a running commentary of events in 2015: The Oscars were “a sad joke, much like our President”, he opined. The event was “just plain bad”. His advice to the organisers? “Put the glamour, beauty & mystery back in the Oscars and the ratings will zoom.”

This year it seems the president may not be sharing his insights with his 25 million Twitter followers. True, Trump famously used Twitter to dismiss Meryl Streep as “over-rated” when she criticised him at the Golden Globe awards last month, but that was before he was sworn in.

Asked about the matter this week, press secretary Sean Spicer said the Trumps would be hosting the annual governors’ ball that night. “I have a feeling that’s where the president and first lady will be focused on Sunday night,” he said.

The relationship between Washington and Hollywood has an interesting history. John F Kennedy was famously drawn to the glamour and fame of the movie scene, epitomised by his affair with Marilyn Monroe. Ronald Reagan was a Hollywood movie star before becoming the 40th president of the United States.

Trump has his own idiosyncratic relationship with Hollywood. His close coterie has strong connections with the LA studios; White House chief strategist Stephen Bannon made a fortune through various Hollywood investments including an early stake in the hit sitcom Seinfeld. As editor of Breitbart News, he also continued to dabble in cinema, making a number of conservative films and documentaries.

Trump himself is one of the few US presidents to have his own star on the Hollywood Walk of Fame, though it has been vandalised a number of times. Just this week a 53-year-old man avoided a jail sentence for taking a pickaxe and sledgehammer to the Trump star while dressed as a construction worker. Last summer, at the height of the presidential election campaign, a miniature concrete wall mysteriously appeared around the five-pointed shape on the pavement.

As a showman who carved a career as a reality TV star and is obsessed with ratings, Trump is evidently drawn to the big screen, but his relationship with the Hollywood has been tested by his ascension to the presidency. Some psychologists perceive a conflict between his ego and his natural attraction to the entertainment industry on one side, and his notorious thin-skin and sensitivity on the other.

Far to the left

With this year’s Oscars promising to be the most political in decades – as Spicer said this week, “Hollywood is known for being rather far to the left in its opinions” – Trump may choose to retreat into his shell rather than publicly protest on Twitter.

Still, as is the case with many strands of American society, Trump’s victory may have given Hollywood a new raison d’etre. Just as parts of the traditional media, the Democratic Party and feminist groups have been emboldened by the arrival of Trump, the self-consciously liberal film industry may be able to give a voice to the half of the US not represented by Trump’s politics.

As it happens, this year’s Oscar nominations are packed with politically charged movies representing the perspective of the marginalised and dispossessed.

These range from Loving, starring nominated Irish actor Ruth Negga in a true story of an interracial couple who brought their fight to have their marriage recognised to the Supreme Court; to Moonlight, a powerful story of a young gay African-American man’s coming of age. Even the captivating La La land, which charts the story of an actor and musician trying to make it in Hollywood, celebrates the American dream and espouses the virtues of hard work, perseverance and creativity.

At a time when the US seems divided as never before, maybe, just maybe, Hollywood can hold a mirror up to America and provide an alternative vision of what the country stands for.