Financial feelgood factor from polls ahead of Dutch elections 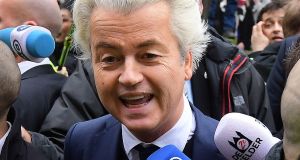 Dutch far-right Freedom Party leader Geert Wilders: little chance of becoming prime minister because the other parties will refuse to work with him. Photograph: Emmanuel Dunand/AFP/Getty 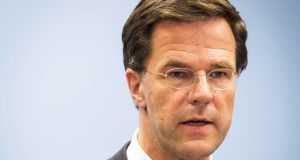 There has been a blizzard of good economic news in these last weeks of the Dutch election campaign, reassuring voters that austerity is a thing of the past – and warning that a swing to the right in the form of the “Patriotic Spring” forecast by Geert Wilders would be a damaging political overreaction.

The figures are certainly positive for prime minister Mark Rutte. But he’ll be asking himself whether they’ll be enough to see off a repeat of the anti-establishment wave that swept Donald Trump into the White House and that’s in the process of ushering the UK out of the European Union.

The statistics show that overall unemployment, seasonally adjusted, fell in January to 5.3 per cent, compared with 6.5 per cent a year ago, and that youth unemployment has dropped below 10 per cent for the first time since August 2011.

At the same time, consumer confidence hit a 9.5-year high this month, with spending on everything from white goods to cars buoyed by the decision of international ratings agency Fitch to include the Netherlands among just 11 countries awarded an increasingly rare AAA credit rating.

That optimism has been reflected too in the most tangible asset of all: the value of the roof over the average Dutch head. Prices have been rising steadily, by 34.7 per cent over the past three years in already pricey Amsterdam – and by a more modest 15.3 per cent average outside the capital.

It’s certainly ironic that after the “lost decade” of the banking crash and the euro crisis, drawing voters’ attention back to a tenuous economic recovery seems the least-worst of the government’s options for diverting the national conversation away from Wilders’s favourite topic: immigration.

The problem with that strategy is that too many “ordinary” Dutch voters have become sceptical about politics and politicians in a way that’s familiar from events in the US and the UK – and that could well be replicated in France and Germany in the second half of this year.

So, while pretty much everyone will be happy to see a pick-up in the economy, not many believe the euro zone’s woes – particularly when it comes to Greece – are really over. And, if they’re not over, few believe EU or Dutch politicians will be any better at tackling them next time around.

Similarly, there’s anger that although 61 per cent of those who voted in last year’s referendum rejected a treaty proposing closer ties between the EU and Ukraine, the Rutte government went ahead and pushed that treaty through parliament. It then claimed retrospective justification when it secured an assurance from the other 27 states that the treaty had never been “a precursor to EU membership” – the main point, it divined, on which opponents had been concerned.

Admirable realpolitik or not, it was the type of tactic that allowed sceptics to question the legitimacy of the democratic process – and allowed Wilders to repeat his Trumpian accusation that the Netherlands is now run by “a fake parliament”.

The exact scale of that disillusionment was measured by a Motivaction poll on February 14th that showed 61 per cent of respondents regarded Dutch politicians as “elitist, unreliable and dishonest”. As a result, a massive 37 per cent of “likely voters” still hadn’t decided who to back.

When it came to people of ethnic origin, the level of disillusionment was equally striking: a study by the ministry of social affairs found that up to 40 per cent of Moroccans and Turks, Dutch citizens all, felt they neither belonged in the Netherlands nor were accepted by the “native Dutch”.

On the other hand, those looking for evidence that democracy is alive and well need look no further than the 31 parties vying for power. Of those, 14 will win at least one seat in the highly fragmented 150-seat parliament, adding up to a typically complex and highly representative Dutch coalition.

It’s a moving target, but latest polls give Wilders’s Freedom Party about 20 per cent of the popular vote compared to some 16 per cent for Rutte’s Liberals, with the next three largest parties – chosen from the Christian Democrats, Labour, D66, the Socialists and GreenLeft – each on 10 or 11 per cent.

What this actually means, points out Kristof Jacobs of Radbout University, is that “the overwhelming majority of Dutch people basically do not vote for Wilders”.

In purely domestic terms, the core issues at the heart of this election are the “post-austerity” ones afflicting the Baby Boomer generation in so many other western countries: the demise of sustainable employment, how to fund education, the increasing cost of healthcare, and the rising retirement age . . . all underpinned by a newly realistic sense of the fragility of the euro and the EU.

Those issues, however, are being largely drowned out by a populist “beauty competition” to see which of the parties can outdo Wilders on immigration.

Rutte’s Liberals want to make it harder for migrants to get visas and passports. The Christian Democrats want migrants who refuse to integrate to lose the right to stay. Labour wants them to sign a “contract” or risk a fine. D66 wants tough selection to deter economic migrants. 50Plus says migrants should require “good behaviour certificates” from local councils. The SGP wants stricter rules on the reunion of migrant families. VNL wants an “Australian-style” points-based policy.

Only the new party, Denk (Think) – founded by recent immigrants to represent their own interests – has tackled immigration on its own terms: saying migrants must be accepted into the community rather than facing targets for integration, and promising 1,000 new police officers to counter racism and discrimination.

So, it may indeed be true that Geert Wilders has no chance ultimately of becoming prime minister because the other parties will refuse to work with him.

However, if he wins the popular vote on March 15th, most of those parties arguably have only themselves to blame. They’ve run this crucial election campaign utterly according to his script.

Just shy of 13 million people will be eligible to vote in the general election on March 15th which could swing the Netherlands sharply to the right. These are the key personalities involved:

The sitting prime minister and Liberal Party leader is hoping to form his third coalition government. However, he faces questions about his leadership if he fails to see off far-right leader Geert Wilders in the fight for the popular vote.

The Freedom Party leader sees himself leading a “Patriotic Spring” along with Marine Le Pen in France. Even if he wins the popular vote, however, other parties say they will refuse to form a coalition with him – so that he cannot become prime minister.

Parachuted in as leader of the junior coalition partners, Labour, after his predecessor took the brunt of Rutte’s austerity policies. Competing for third place against the Christian Democrats, centre-left D66, the Socialists and GreenLeft.

The leader of centre-left D66 (originally Democrats 66) could find himself in a pivotal position after the election if Asscher fails to revive Labour. A former winner of the press award for Parliamentarian of the Year.