Julie Bishop says resettlement of 1,250 refugees in United States will proceed as planned 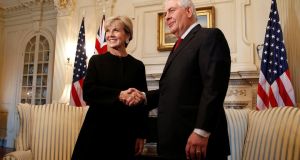 The Trump administration will honour a commitment by the United States to resettle 1,250 refugees from Australia’s offshore detention sources, the Australian foreign minister Julie Bishop has said.

The issue was a source of controversy after Australia’s prime minister Malcolm Turnbull raised it with US president Donald Trump in a phone call at the end of January, which Mr Trump was reported to have cut short.

Under an agreement reached with the Obama administration, the US was to take the 1,250 refugees, in return for Australia accepting Central American refugees who are currently in a processing centre in Costa Rica.

President Trump tweeted: “Do you believe it? The Obama administration agreed to take thousands of illegal immigrants from Australia. Why? I will study this dumb deal!”

Some of the refugees are from predominantly Muslim countries including Iraq, Iran, Pakistan and Bangladesh.

Under laws enacted in 2013, the Australian government has said it will never allow refugees who arrive by boat to settle in Australia. The measure is meant as a deterrent to people smugglers.

The refugees are currently housed on the Pacific island nation of Nauru and on Manus Island in Papua New Guinea.

Speaking to The Irish Times during a visit to Dublin, Ms Bishop said the White House had confirmed to her government that the original deal with the US would be honoured.

“My understanding is that the matter is progressing as it would have under the Obama administration.”

Prior to her visit to London and Dublin, Ms Bishop visited Washington, where she met US vice-president Mike Pence and secretary of state Rex Tillerson.

Ms Bishop said she was impressed by Mr Tillerson’s grasp of foreign affairs. “Time will tell, but he could be an inspired choice as secretary of state. President Trump has made it quite clear that he is a disrupter. He does not accept the status quo necessarily.

“By bringing in somebody from the outside into the State department, he is putting his stamp on how he wants to the United States to engage with the whole world. I found Rex Tillerson to be highly intelligent, well-informed and with a very charming manner.”

She described Mr Pence as somebody who was “very well informed on global issues” and the new national security adviser Gen Herbert McMaster as a “high-level strategic thinker and that was evident in our meeting”.

“I conclude that the members of the administration that I have met certainly have a sophisticated understanding and appreciation of the United States’ role in the world, including the fact that it has been the defender and guarantor of the international rules-based system that has enabled so many countries to prosper and live in relative stability and safety.”

Australia has faced criticisms about the detention of refugees on both Nauru and on Manus Island, with the United Nations repeatedly calling on Australia to end to the process. Leaked documents have suggested refugees have suffered violence and degrading treatment.

Ms Bishop responded: “I reject that characterisation of it. Papua New Guinea and Nauru are signatories to the relevant conventions. The Australian government has funded the infrastructure required and assists funding those governments with the required health and educational services required. The conditions I believe are adequate for the purpose for which they are being created.”