‘We’re as Catalan as those who want independence’ 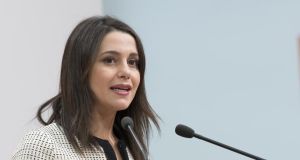 General secretary of Citizens Inés Arrimadas: “There is nothing more anti-Catalan than wanting to take Catalonia out of Spain.” Photograph: Oscar Gonzalez/NurPhoto via Getty Images

The frontline political career of Inés Arrimadas is only five years old, but at the age of 35, she has become the leader of the opposition in Catalonia and national spokeswoman for the liberal, constitutionalist, Ciudadanos (or “Citizens”) party.

With the Popular Party (PP) of Mariano Rajoy struggling in the northeastern region, Arrimadas has become the prominent voice of unionism here, with her party winning 25 seats in the 135-seat chamber in the 2015 elections.

Having grown up in Andalusia before moving to Barcelona as an adult, she had to learn from scratch the Catalan language that she often uses to great effect when delivering diatribes against the region’s independence movement. Given her politics, she says, that outsider status can be provocative.

“I’m from another part of Spain and even though I speak Catalan perfectly and I’ve married a Catalan, from Girona, it bothers some people that I oppose independence,” she tells The Irish Times. “But that doesn’t affect me.”

Arrimadas believes one of her party’s main priorities is to counter what she sees as the untruths being peddled by the pro-independence Catalan government, led by Carles Puigdemont, which complains of lack of investment in the region and constantly broken promises on the part of the central government.

“We are already one of the regions in Europe with the highest degree of self-government,” she says. “It’s hard to find another region with as many powers as us. We have powers in the areas of healthcare, education, in prisons, we have our own police force.

“As a Catalan, I’m in favour of improving infrastructure and of reforming the regional financing system, but there’s no way I can accept the exaggerations that the Catalan government makes in order to justify us leaving Spain.”

Ciudadanos was originally a regional party, formed to counter Catalan nationalism. But in 2015 it successfully went nationwide under the charismatic leadership of Albert Rivera, challenging the traditional parties and vying with Podemos for the votes of frustrated Spaniards. It is now Spain’s fourth political force and, while its parliamentary backing in Madrid helped the PP form a government last year, Ciudadanos is critical of Rajoy’s handling of Catalonia.

“The Spanish government has got it wrong, because it hasn’t refuted the false claims of the Catalan government . . . nor has it reformed Spain in the way it should have done,” Arrimadas says.

She also chastises Rajoy for not offering “an exciting vision of Spain” – a criticism that many would also aim at Ciudadanos, which, amid its attacks on separatism, has not yet put forward a discernible, concrete proposal for Catalonia’s relationship with the rest of the country.

But a major target of Arrimadas’s exasperation with the Catalan government is a referendum on independence it is planning for an unspecified date this year and which Madrid staunchly opposes. She believes it would merely be a repeat of an informal referendum held in 2014, when independence was the overwhelming winner but very few unionists turned out due to the ballot’s illegal status.

“That’s their only option: to repeat something which is illegal, which serves no purpose, has no international recognition and no guarantees – because they counted the votes themselves [in 2014],” she says.

“I think they’re looking for an excuse from the Spanish government to be able to say ‘They won’t let us vote’, rather than repeating something which is meaningless.”

But why not resolve this problem once and for all by allowing a Scotland-style official referendum that is negotiated with Madrid, as the Catalan government proposes?

“We don’t have a situation like the one in Scotland, either historically, legally or politically speaking,” she says, pointing out that Catalonia has never existed previously as an independent state. Arrimadas also warns that, with opinion currently evenly divided on independence, a formal referendum would be even more factious.

Her biggest concern regarding independence appears to be how it might affect Catalonia’s relationship with Europe. The Catalan government insists that the new state it wants to create would remain a member of the EU. But Arrimadas is adamant that it would have to leave, citing European Commission officials and Angela Merkel, among others, to back up her argument. She also warns that the EU will be desperate to avoid setting a precedent that other restive regions – in Germany, Italy, Belgium or France, for example – might want to follow.

“There is nothing more anti-Catalan than wanting to take Catalonia out of Spain and out of Europe, which is what the regional government wants,” she says.

“It’s nationalism, plain and simple. We all know what nationalism meant in 20th century Europe. Nationalism is based on the idea that the other party is to blame for my defects and problems,” she says. “Nationalism also means saying ‘Only those who think like me or who speak my language are Catalans’ – it’s a totally segregationist project.

“We’re as Catalan as those who want independence.”

1 Covid-19: Taoiseach warns of restrictions in cities as hospital cases pass 100
2 All third level colleges moved to Level 3, most tuition moved online
3 How Finland kept Covid-19 in check and protected its economy
4 People asked not to cross Border as Donegal prepares for Level 3 restrictions
5 Aer Lingus staff say they are living in ‘near poverty’ and unable to cover rent
Real news has value SUBSCRIBE