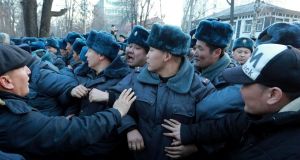 Kyrgyz police in front of protesters at a rally in support of Omurbek Tekebayev, the leader of the Ata Meken (Fatherland) party, in Bishkek, Kyrgyzstan. Photograph: Igor Kovalenko

Kyrgyzstan’s state security service said it detained opposition leader Omurbek Tekebayev on Sunday on charges of corruption and fraud, a move that may eliminate him as a contender for presidency in the upcoming election.

Tekebayev (58) leads the Ata Meken (Fatherland) party’s parliamentary faction and is one of the most outspoken critics of President Almazbek Atambayev, whose term ends this year.

The ex-Soviet Central Asian nation will hold a presidential election on November 19th. The state security service said in a statement it had detained him at an airport upon arrival from Turkey.

In a separate statement, the prosecutor general’s office said it suspected Mr Tekebayev of taking a $1 million bribe from a Russian investor in 2010.

Mr Tekebayev, who was then a senior member of a provisional government, promised the investor he would be able to take over a local telecommunications company, prosecutors said.

Kanybek Imanaliyev, a member of parliament who belongs to Tekebayev’s Ata Meken faction, said he denied any wrongdoing.

“He considers his detention . . . unwarranted and illegal and a continuation of political repressions,” Mr Imanaliyev said. “We planned to hold a party congress within a month and nominate him as candidate [for presidency].”

A few hundred Tekebayev supporters rallied outside the state security service headquarters in the centre of the capital Bishkek on Sunday, saying they would stay until his release.

Mr Tekebayev’s Ata Meken party said in a statement his detention was illegal and that he had been denied immediate access to a lawyer.

Mr Atambayev cannot run for re-election under the Kyrgyz constitution, but his allies in parliament successfully pushed through a referendum on a package of amendments significantly boosting the powers of the prime minister.

This has prompted speculation Mr Atambayev may either become a powerful cabinet head – although he denies having such plans – or install a loyal figure as prime minister to retain power in the mostly Muslim nation of six million.