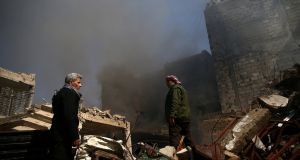 The remains of a building hit by air strikes in the rebel-held and besieged Damascus neighbourhood of Douma on Sunday. Photograph: Reuters/Bassam Khabieh

The Syrian army and its allies made a sudden advance on Saturday and Sunday into areas held by Islamic State, a war monitor said, as the jihadist group retreated after losing the city of al-Bab to rebels backed by Turkey.

By taking Islamic State territory south of al-Bab in northwest Syria, the army is preventing any possible move by Turkey and the rebel groups it supports to expand southwards, and is moving closer to regaining control of water supplies for Aleppo.

On Sunday, the army took the town of Tadef, just south of al-Bab, after Islamic State (also known as Isis) withdrew from it, state television reported. Earlier this month, a senior Russian official said Tadef marked an agreed dividing line between the Syrian army and the Turkish-backed forces.

The eastwards advance south of Tadef has extended Syrian army control across 14 villages and brought it within 25km (15 miles) of Lake Assad, the stretch of the Euphrates above the Tabqa dam.

Also on Sunday, the Syrian army and its allies made a new advance against Islamic State around Palmyra, coming to within a few kilometres of the ancient desert city that the jihadists captured in December.

Islamic State’s holdings in northwest Syria have been eviscerated in recent months by successive advances by three different, rival forces: Syrian Kurdish groups backed by the United States, the Turkey-backed rebels, and the army.

Fighting in the area is continuing as the army and its allies advance, the Syrian Observatory for Human Rights, a Britain-based war monitor, said on Sunday.

Islamic State’s loss of al-Bab after weeks of bitter street fighting marks the group’s effective departure from northwest Syria, once one of its most fearsome strongholds, and an area of importance because of its location on the Turkish border.

Steady advances since 2015 by the Syrian Democratic Forces, the Kurdish-led alliance of armed groups, had pushed jihadists from much of the frontier by the middle of last year, and have since then threatened its stronghold in Raqqa.

Turkey’s entry into Syria’s civil war, via the Euphrates Shield campaign in support of rebel groups fighting under the banner of the Free Syrian Army, was intended both to push Islamic State from the border and to stop Kurdish expansion there.

Syrian activists on Sunday called for the Assad government to engage in serious talks on political transition and for the United Nations to strengthen the fragile ceasefire as violence engulfed parts of the country.

UN mediator Staffan de Mistura said a militant attack in Homs on Saturday was a deliberate attempt to wreck the Geneva peace talks, while the warring sides traded blame and appeared no closer to actual negotiations.

“Our hopes are not high given the incidents on the ground and the continuous violations by the regime forces and its backers of the ceasefire,” Mutasem Alysoufi of The Day After Syria campaign, which supports a democratic transition, told Reuters in Geneva.

Warplanes bombed rebel-held areas around several Syrian cities on Sunday, including in the al-Waer district of Homs, and in towns around Damascus, the Syrian Observatory said. One person was killed in the Damascus suburb of Douma and three in al-Waer, according to the monitor, while shells and rockets were launched at insurgent districts in Deraa and Idlib provinces. Rebels fired several shells at a suburb of government-held Aleppo.

Under Security Council resolution 2254, Mr de Mistura is meant to develop a plan to monitor the ceasefire and sanction those who violate it, Mr Alysoufi said. “So this is a duty of the UN.”

On the government delegation led by Syrian ambassador Bashar Ja’afari, he said: “We believe that they are not serious to engage here in serious political discussion. Rather, they are gaining more time and continuing their military strategy on the ground.”

Covid-19: Trump goes on defensive as Biden claims president has ‘quit on America’ 09:50
Coronavirus: US sets single-day record cases during new surge 08:16
Coronavirus: Frances passes 1m cases; Europe sees record number of new infections 22:05
US election: Trump travels to Florida as he steps up campaigning 21:05
Sudan to normalise ties with Israel in move dubbed by Palestinians as ‘a stab in the back’ 19:48