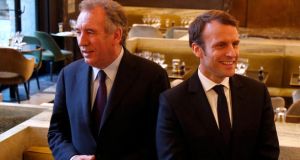 François Bayrou and Emmanuel Macron: The candidates for the French presidency have created an alliance, boosting Macron’s chances of beating Marine Le Pen in a run-off. Photograph: Reuters/Charles Platiau

Pollsters said Mr Macron had been buoyed by the alliance announced this week with centrist politician François Bayrou, enabling him to move ahead of conservative candidate François Fillon.

The poll showed Mr Macron would beat Ms Le Pen in the run-off, with 61 per cent of the vote versus 39 per cent.

Ms Le Pen will lead in the first round of voting with 27 per cent, followed by Mr Macron with 25 per cent and Mr Fillon with 19 per cent, the poll showed.