US election: What happens between now and inauguration day? 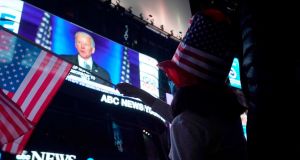 Democrat Joe Biden may be US president elect but he will not take up the position until January 20th. Photograph: Timothy A Clary/AFP via Getty Images

Although Democratic nominee Joe Biden is now the president-elect, there are still quite a few steps left in the US electoral process. He is projected to win, but a few more things have to take place before it becomes official. Here’s what happens now, and when it has to be done by.

December 8th: This is the deadline for resolving election disputes at the state level. All state recounts and court contests over presidential election results are to be completed by this date.

December 14th: Electors vote by paper ballot in their respective state capitols and also in the District of Columbia, which while it is the seat of the US government, is not actually a state. Thirty-three states and DC have laws or party regulations requiring electors to vote the same way the popular vote goes in the state. In some states, electors can even be replaced or subjected to penalties if they do not toe the line. An elector who does not vote according to who won the popular vote is known as a “faithless elector”. The votes for president and vice-president are counted and the electors sign six “certificates of the vote”. The certificates, along with other official papers, are sent by registered mail to various officials, including the president of the US Senate.

December 23rd: The certificates must be delivered to the designated officials.

January 6th, 2021: The House of Representatives and senate hold a joint session to count the electoral votes. If one ticket has received 270 or more electoral votes, the president of the senate, currently vice-president Mike Pence, announces the results.

If neither presidential candidate wins at least 270 electoral votes, the House can decide the election, based on the 12th amendment to the US constitution. If required, it would elect the president. That is not going to happen in 2021 – Biden will easily clear the 270 threshold.

January 20th, 2021: The president-elect is sworn into office on inauguration day. The outgoing president welcomes the president-elect to the White House. Then in a ceremony traditionally attended by all living former presidents, the new president swears the oath of office. This is presided over by the chief justice of the supreme court, which is currently John Roberts. – Guardian