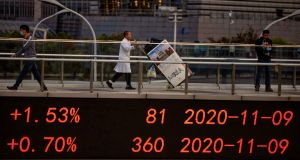 Joe Biden is seen as likely to take a less openly aggressive attitude to China.

Stock markets greeted the election of Joe Biden with decent early gains on Monday, but the mid-morning announcement from Pfizer and BioNTech of the latest results of its coronavirus vaccine trials led to a sharp acceleration in buying. It drove hopes of progress in addressing the key constraint on the world economic outlook – ongoing severe restrictions which have hit economies hard.

No doubt there will be much discussion on what exactly this vaccine news means in the days ahead. But investors have decided to buy first and ask questions later, with stocks reliant on consumer spending and travel, and financial shares among those to gain most.

Biden’s election has been greeted by the markets as bringing some stability and lessening the risks of a damaging escalation in trade wars. Four years ago, after the the night of Donald Trump’s election , the US dollar and futures prices of US stocks had collapsed, only for a recovery to set in as soon as the next day. The rally broadly continued during Trump’s term, interrupted by a big hit from Covid-19 and a subsequent recovery back to record levels.

Now in the months ahead, market confidence, like so much else, will depend on the path of Covid-19. As of now there is a long way to play out in the vaccine story, but the latest news is clearly positive. The bull case for shares has been that the stimulus from central banks and government spending will continue for now – and that by the middle of next year a vaccine will be available.

This has already driven some shares to high valuations, with many markets at record levels. Further progress – and a widening of gains in shares relying on the consumer economy – now depend on whether the latest news on a vaccine can be built on. With the European newsflow dominated by renewed lockdowns and president-elect Biden urging caution, there is still a long way to go.

The backdrop set by the change in the White House is seen as being supportive, despite plans to hike tax on business. In the area of trade, Biden is seen as likely to take a less openly aggressive attitude to China. However, tariffs and tensions are likely to remain.

With the European Union, some solution on the long-running dispute on subsidies for Boeing and Airbus would be welcome – though the EU announced on Monday that it will impose further tariffs on the US in relation to this following a recent WTO ruling.

Ireland’s fear, had Trump returned to the White House, was of escalating trade tensions, which could have seen Ireland caught in the middle of a tariff war. Biden is likely to try to rebuild the transatlantic relationship, though tensions on trade and the taxation of US companies will remain.

A key marker will be whether progress can be made on a global deal on corporate tax at the OECD – the Biden administration will want big companies to pay more tax, but they won’t want to sign off on a deal that is seen to “pick on” US firms, or which might cost the US exchequer.

Ireland will also closely watch Biden’s campaign promise to locate more of the vital supply chains of pharma companies in the US, including proposed changed to intellectual property taxation.

The initial market gains come despite president-elect Biden’s promise to increase the tax on corporate profits, which Trump had cut to 21 per cent. There are doubts about whether this move will get through a Senate with a likely Republic majority.

In any case, for now investors are being driven by another key factor. Interest rates and returns are rock bottom all over the world and investors need to put their money somewhere.

The big US tech companies, which have survived the pandemic and gained for higher demand for phones, laptops and so on, have been seen as a good bet by investors. And if the vaccine news remains positive, the gains will spread.

The jump in the stocks of more traditional companies – in sectors like travel, retail and so on – after the vaccine news shows how much it at stake for the global economy in the months ahead. Pfizer has given the markets a rise. But there is a way to go yet.