People in Ballina, Co Mayo, Joe Biden's ancestral homeland, came on to the street to celebrate his win in the US presidential election over the weekend. Video: Reuters/Cllr Mark Duffy 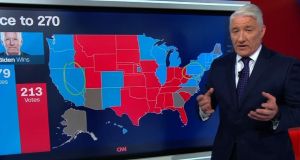 CNN news anchor John King has been one of the media stars of the US election coverage thanks to his ‘magic wall’ interactive election map. Photograph: CNN.

Ballina and Carlingford can claim Joe Biden and Doonbeg Donald Trump but Doonloughan in Connemara can join an illustrious list of famous Irish ancestral homes linked to the US presidential election.

CNN news anchor John King, one of the media stars of the US election coverage thanks to his “magic wall” interactive election map that mesmerised Irish viewers, revealed his Irish roots in an early Sunday morning tweet.

“It begins in Doonloughan, and a visit is long overdue,” he replied to Sunday World journalist Kevin Palmer who tweeted at him: “About time we got your Irish story down in print John.”

“We will have the green carpet ready for you,” Gibbons responded.

King, a proud Irish American raised in the Irish neighbourhood of Dorchester, Massachusetts, left few in doubt about his ancestry during the prolonged and traumatising election count after Lisa McGee, the screenwriter of comedy hit Derry Girls, tweeted: “Is @JohnKingCNN Irish yet?”

Helping to put down his Irish story, King shared details of his family’s Irish ties back to Connemara with The Irish Times.

It begins in Doonloughan, and a visit is long overdue. https://t.co/VibjY8LQnP

He had an Irish scally cap and always a bowl of oranges on the table.

The American journalist said that his grandfather, Christopher King, was born in 1891 in Ballyconneely and later lived in Doonloughan in the early 1900s. He arrived in Boston in 1911 and settled in the Dorchester neighbourhood of Boston.

“He died when I was five; I have faint but fond memories of visiting him in the soldiers’ retirement home where he lived,” said King.

“He had an Irish scally cap and always a bowl of oranges on the table. He would come to our house for holidays. I don’t remember much except how much my dad was crushed when he died.

“My father’s name was Richard but everyone called him Chris because he looked so much like his father.”

King said that his grandmother, Bridget King (née Joyce), was also from Connemara. She was born in 1891 in Cashel, Co Galway and emigrated to Boston in 1909.

There are also Littles and Keenans in the family tree back in Ireland, he said.

King, as even people with a passing knowledge of Connemara will know, is a common surname in and around the region with the name King associated with local shops, pubs and restaurants - and one of the country’s best known shellfish exporters.

Doonloughan, a 25-minute drive south of Clifden along the Wild Atlantic Way beyond Mannin Bay, is well known for its scenic and isolated sandy beach.

It is not far from the scene of another major news event of 2020 (but one which King is unlikely to have heard of): the infamous Oireachtas Golf Society gathering at Connemara Golf Course in Ballyconneely and the subsequent well-attended dinner at the Station House Hotel in Clifden.

The 1911 census lists two families of 10 people named King living in Doonloughan at the time - farmer Mark King and his wife Annie and their two infant children Mary and John, and 20-year-old fisherman Festus “Festy” King who lived with his widow mother Kate and four siblings.

There is a long tradition of emigration from Connemara to Boston with the parents of another famous political son of the Connemara, Boston mayor Marty Walsh, coming from Ros Muc and Callowfeenish near Carna in Co Galway.

Ship manifest records held at New York’s Ellis Island, the entry point through which many Irish emigrants passed, show scores of Kings from Connemara passing through its doors in the early years of the 20th century.

Perhaps that CNN magic wall could be used to map out a family tree and an Irish emigration story instead of a presidential election victory.