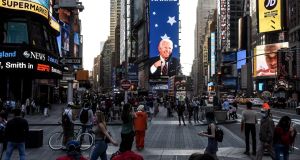 President-elect Joe Biden will convene a coronavirus task force on Monday following his victory in the US presidential election while president Donald Trump pursues several long-shot gambits to hold on to his job.

Mr Biden is due to meet with an advisory board co-chaired by former surgeon general during the Obama administration Vivek Murthy, former Food and Drug Administration (FDA) commissioner David Kessler and Yale University associate professor Marcella Nunez-Smith to examine how best to handle a pandemic that has killed more than 237,000 Americans.

The Democratic former vice-president will then give remarks in Wilmington, Delaware, about his plans for tackling Covid-19 and rebuilding the economy. “Dealing with the coronavirus pandemic is one of the most important battles our administration will face, and I will be informed by science and by experts,”

Mr Biden said in a statement on Monday.

The group of scientists and experts will liaise with local and state officials on the pandemic response, including how to safely reopen schools and firms and tackle racial disparities. The Biden panel includes Rick Bright,whistleblower who says he was removed from his Trump administration post for raising concerns about coronavirus preparedness and Luciana Borio, who specialises in complex public health emergencies

Mr Trump has frequently clashed with top health officials over the pandemic. Vice-president Mike Pence is due to meet with the White House coronavirus task force on Monday for the first time since October 20th.

Although Mr Biden will not assume the presidency until January 20th, a transition team has been established and is to step up activity in the coming weeks, though a decision on cabinet members is not expected until after Thanksgiving in late November.

Mr Trump, who played golf in Virginia on Saturday and Sunday, has not yet conceded the race, and has launched a number of legal challenges in different states as he seeks to claim victory. While some reports on Sunday suggested that his wife Melania was encouraging him to concede, the first lady appeared to endorse her husband’s suggestion that “illegal” votes were behind Mr Biden’s victory.

“The American people deserve fair elections. Every legal – not illegal – vote should be counted,” she tweeted. “We must protect our democracy with complete transparency.”

Mr Trump’a campaign aides, senior Republican officials and other allies have told AP the president’s threatened legal action is more about creating a more palatable exit strategy from the White House and keeping supporters on side than it is about proving electoral wrongdoing.

Mr Trump has no public events scheduled for Monday, and has not spoken in public since Thursday. He plans to hold rallies to build support for his challenge to the election results, campaign spokesman Tim Murtaugh said.

Mr Trump will seek to back up his as-yet-unsubstantiated accusations of voting fraud by highlighting obituaries of dead people the campaign said voted in the election, Mr Murtaugh said. Mr Trump also announced teams to pursue recounts in several states. Experts said that effort, like his lawsuits, are unlikely to meet with success. “The chances of a recount flipping tens of thousands of votes across multiple states in his favour are outside anything we have seen in American history,” William Antholis, the director of the University of Virginia’s Miller Center thinktank, wrote in an essay on Sunday.

Governments from around the world have congratulated Mr Biden since Saturday, signalling they are turning the page. But Russia, which US intelligence agencies say intervened in the 2016 election to support Mr Trump, said on Monday it would wait for the official results before commenting on the outcome, noting Mr Trump’s legal challenges. China was similarly cautious. Mexican president Andres Manuel Lopez Obrador, whose country shares a 3,000km border with its leading trading partner, has also said he would wait until the legal matters are resolved before commenting on the election.

Mr Biden’s advisers are moving ahead and considering candidates for top cabinet posts. But the transition cannot shift into high gear until the US General Services Administration (GSA), which oversees federal property, certifies the winner. Emily Murphy, the Trump appointee who runs the agency, has not yet done so and a GSA spokeswoman gave no timetable for the decision. Until then, the GSA can continue providing Mr Biden’s team with offices, computers and background checks for security clearances, but they cannot yet enter federal agencies or access federal funds set aside for the transition. The Biden campaign on Sunday pressed the agency to move ahead. “America’s national security and economic interests depend on the federal government signalling clearly and swiftly that the United States government will respect the will of the American people and engage in a smooth and peaceful transfer of power,” the campaign said in a statement.

Mr Biden is reportedly planning a series of urgent orders that would roll back some of Mr Trump’s agenda, in some cases fulfilling his campaign promises. That includes repealing the travel ban against Muslim-majority countries (one of Trump’s first actions); rejoining the international climate accord; rejoining the World Health Organisation; taking action to protect “Dreamers” from deportation; revoking “the global gag rule”, which blocks the US government from funding groups that conduct abortions or advocate abortion rights; and reestablishing Obama-era environmental regulations.

Meanwhile, turn-out in the US election has hit a 50-year high and eclipsed the record set in Barack Obama’s triumph in 2008, in what analysts are calling an extraordinary engagement in what amounted to a referendum on Donald Trump’s leadership.

With votes still being counted, the tallied ballots accounted for 62 per cent of the eligible voting-age population in the US. That is a 0.4 percentage point increase so far over the rate hit in 2008, when the nation elected its first black president.

The sheer number of votes also set records, although that is a less remarkable milestone given the country’s growing population.

The result is the highest turn-out rate from eligible voters since 1968, according to data from the Associated Press (AP) and the United States Elections Project, which tracks turn-out. Experts think the 2020 rate could hit heights not seen since the beginning of the 20th century, before all women were allowed to vote.

Many of the states with the biggest turnout increases — including Arizona, Texas and Georgia — were new battlegrounds in the presidential race, places where Democrats sought to mobilise new voters and shift Republican strongholds.

Counting continued in a handful of states over the weekend as some races were yet to be called. Though Nevada was called for Mr Biden on Saturday, after he had won Pennsylvania with its 20 electoral college votes, a final result in Arizona, Georgia and North Carolina were still awaited, though the latter is expected to be called for Donald Trump.

In Arizona, Mr Trump narrowed the gap with Mr Biden to 18,500 votes on Sunday with more ballots expected to be declared in the greater Phoenix area.

But Mr Biden increased his lead in Georgia, which is awaiting votes from military and overseas voters as well as provisional ballots. Nonetheless, a recount will take place in the state, the secretary of state has said, given the extremely tight margin in the result. – Additional reporting Reuters, PA, Guardian