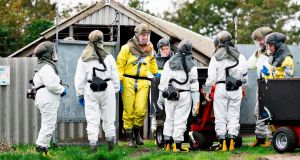 Employees from the Danish Veterinary and Food Administration and the Danish Emergency Management Agency wearing protective equipment work to cull minks in Gjol, Denmark, over the weekend. Photograph: Getty

The decision by the Danish government to kill millions of mink because of coronavirus concerns, effectively wiping out a major national industry, has put the spotlight on simmering worries among scientists and conservationists about the vulnerability of animals to the pandemic virus and what infections among animals could mean for humans.

The most disturbing possibility is that the virus could mutate in animals and become more transmissible or more dangerous to humans.

In Denmark, the virus has shifted from humans to mink and back to humans, and has mutated in the process.

Mink are the only animals known to have passed the coronavirus to humans, except for the initial spillover event from an unknown species.

The versions of the virus that have mutated in mink and spread to humans are not more transmissible or causing more severe illness in humans. But one of the variants, found in 12 people so far, was less responsive to antibodies in lab tests.

Danish health authorities worried that the effectiveness of vaccines in development might be diminished for this variant and decided to take all possible measures to stop its spread.

This included killing all of the country’s mink and effectively locking down the northern part of the country, where the mutated virus was found.

The United Kingdom has banned travelers from Denmark who are not UK citizens.

All passengers arriving into this State from Denmark will have to restrict their movments for 14 days without exceptions, the Department of Health has confirmed.

The World Health Organization and scientists outside of Denmark have said they have yet to see evidence that this variant will have any effect on vaccines.

They have not, however, criticised Denmark’s decision to cull its mink population. Mink are not the only animals that can be infected with the coronavirus.

Dogs, cats, tigers, hamsters, monkeys, ferrets and genetically engineered mice have also been infected. Dogs and cats, including tigers, seem to suffer few ill effects. The other animals, which are used in laboratory experiments, have exhibited varying responses.

Farmed mink, however, have died in large numbers in Europe and in the United States, perhaps partly because of the crowded conditions on those ranches, which could increase the amount of exposure.

Public health experts worry, however, that any species capable of infection could become a reservoir that allowed the virus to reemerge at any time and infect people.

The virus would likely mutate in other animal species as it has been shown to do in mink. Although most mutations are likely to be harmless, Sars-CoV-2 conceivably could recombine with another coronavirus and become more dangerous. Conservation experts also worry about the effect on animal species that are already in trouble.

One approach to studying susceptibility has been to look at the genomes of animals and see which ones have a genetic sequence that codes for a protein on cells called an ACE2 receptor, which allows the virus to latch on.

One team of researchers studied the genomes of more than 400 animals. Another group did a similar study of primates, which are often infected with human respiratory viruses.

Other researchers are studying species from Beluga whales to deer mice for signs of the coronavirus.

Kate Sawatzki, the animal surveillance co-ordinator for a testing project in pets and other animals at the Cummings School of Veterinary Medicine at Tufts University, said: “To date, we have tested 282 wildlife samples from 22 species, primarily bats in New England rehabilitation facilities, and we are happy to report that none have been positive.”

They have also tested 538 domestic pets, including from households with people with Covid-19, and none have shown signs of active virus. However, Ms Sawatzki said, the lab also conducted blood tests for antibodies, showing exposure, and there they did find antibodies, as is common in humans.

The pets seemed to be getting infected but not getting sick or passing the virus on.

So far, the mink in Denmark are the only known instance of the virus infecting an animal, mutating and transferring back to humans.

Emma Hodcroft of the University of Basel, Switzerland, traces various mutated versions of the coronavirus as it has spread through Europe and has reviewed scientific information released by Danish health authorities.

She said she applauded the government’s decision to take swift action and cull the mink.

“Many countries have hesitated and waited before acting,” said Ms Hodcroft, “and it can be incredibly detrimental in the face of SARS-CoV-2, as we see.”

But she did not approve of the way the information was released, particularly in the government’s Wednesday news briefing, which warned of a dire threat to potential human vaccines but offered no detail for the concern.

“The communication of the science could have been much clearer and led to less worry around the world,” Ms Hodcroft said. - New York Times Service