Biden pledges to unify America as he prepares for transition

World leaders congratulate president-elect, while Trump has yet to concede 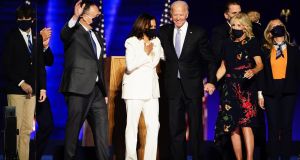 President-elect Joe Biden and vice-president-elect Kamala Harris with her husband Doug Emhoff and Jill Biden during a celebratory event held outside the Chase Center in Wilmington, Delaware, on Saturday. Photograph: Jim Lo Scalzo/EPA

US president-elect Joe Biden is assembling a transition team as he prepares to assume the presidency of the United States, bringing to a close four years of Donald Trump’s tumultuous reign in the White House.

Following days of vote counting, the former vice-president won the key state of Pennsylvania on Saturday, propelling him to the 270 electoral votes needed to win the electoral college.

In a poignant victory speech in Delaware on Saturday night he pledged to unify the country and “to make America respected around the world again”.

“The people of this nation have spoken. They’ve delivered us a clear victory, a convincing victory,” he said, to a cacophony of car horns at the drive-in celebration in Wilmington. But he also pledged to reach out to Republicans and govern for “all Americans”, implicitly acknowledging the large vote Mr Trump received in the election despite ultimately losing the contest.

“I’m a proud Democrat, but I will govern as an American president. I will work as hard for those who didn’t vote for me as those who did,” he said. “Let this grim era of demonisation in America begin to end – here and now.”

Vice-president-elect Kamala Harris delivered a speech imbued with the history of the moment, as she became the first woman and first person of colour to win a vice-presidential contest.

Quoting the late civil rights icon and congressman John Lewis, she thanked voters for “turning out in record numbers to make your voices heard”.

“You chose hope, unity, decency, science, and – yes – truth. You chose Joe Biden as the next president of the United States of America. Joe is a healer, a uniter, a tested and steady hand. A person whose own experience of loss gives him a sense of purpose that will help us, as a nation, reclaim our own sense of purpose.”

Paying tribute to the women, and women of colour, who have come before her, she said: “I stand on their shoulders.

“While I may be the first woman in this office, I won’t be the last, because every little girl watching tonight sees that this is a country of possibilities,” she said to cheers.

As world leaders, including Taoiseach Micheál Martin, congratulated the president-elect, Mr Trump gave no indication that he would concede.

Instead, he made several unsubstantiated and erroneous claims on Twitter that he had “won” the election, while his campaign continued to pursue various legal challenges. Returning from his golf course in Virginia on Sunday, he tweeted: “Since when does the Lamestream Media call who our next president will be? We have all learned a lot in the last two weeks!”

Senator Mitt Romney, one of the few Republicans to congratulate Mr Biden, said that he expects Mr Trump “to keep on fighting until the very end”, stating that the president has a “relatively relaxed relationship with the truth”.

But he also highlighted the challenges facing Mr Biden if Republicans retain control of the Senate as widely expected. “We’re not going to be turning a sharp left turn in terms of public policy,” he warned.

Former president George W Bush congratulated Mr Biden, describing the outcome as “clear”. “I know Joe Biden to be a good man, who has won his opportunity to lead and unify our country,” he said.

Though the counting of votes is still continuing in a handful of states, and a recount will take place in Georgia, the results of those tallies are unlikely to change the outcome of the election

Mr Biden is already moving ahead with transition plans, indicating that he will sign several executive orders on the first day of his presidency, including re-entering the Paris climate accord.

The Taoiseach hopes to speak to the president-elect in the coming days, a spokeswoman said. Speaking in Enniskillen, Mr Martin said Mr Biden was “steadfast” in his support for the Belfast Agreement and would work with the Government to protect it.

But British prime minister Boris Johnson said he intends to press ahead with the controversial Brexit withdrawal Bill which will allow ministers to renege on the original withdrawal agreement struck with the EU, despite Mr Biden’s victory.

The Irish Times understands that former senator Chris Dodd is the favourite to become the next US ambassador to Ireland.