Turkey hails fall of Shusha to Baku's forces, but Yerevan says battle is not over 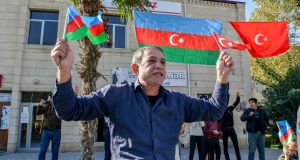 A man waves the national flags of Azerbaijan and Turkey to celebrate in Barda, Azerbaijan, on Sunday, after President Ilham Aliyev said the Azerbaijani armed forces had taken control of Shusha in the Nagorno-Karabakh region. Photograph: Ahmed Mukhta/AP Photo

Azerbaijan claims to have seized the strategic city of Shusha in the disputed region of Nagorno-Karabakh, but Armenia denied that it had fallen to Azeri forces after six weeks of fighting that have killed more than 1,000 people.

Azeri president Ilham Aliyev said the capture of Shusha was a major step in his country’s bid to reassert control over a breakaway province that has been run by its ethnic Armenian majority since a war in the early 1990s.

“Shusha is free now. We have returned to Shusha. We have won this historic victory on the battlefield. November 8th, 2020, will forever remain in the history of Azerbaijan,” the autocratic leader said on Sunday in an address to his nation.

“Nearly 30 years of meaningless negotiations did not bring us any closer to a result. Our ancient historical lands were under occupation for almost 30 years . . . We are expelling the occupiers from our lands and we will expel them,” he added.

“If the Armenian leadership does not respond to my demand, we will go to the end. No one can stop us . . . I want to say again that our victory march continues. Enemy forces must be withdrawn from all occupied territories.”

Shusha – which Armenians call Shushi – is the second-largest city in Nagorno-Karabakh. It is strategically important because it overlooks the regional capital Stepanakert, about 15km away, and lies on the main road linking the region to Armenia proper.

Yerevan insisted that the city had not changed hands, however, with Armenian defence ministry spokesman Artsrun Ovannisian saying that “fighting in Shushi is continuing; wait and believe in our troops”.

Yet Nagorno-Karabakh’s leader Arayik Harutyunyan appeared to acknowledge that its military position was increasingly difficult on Sunday morning.

“I watched the sunrise following one of the hardest nights in my life. With our homeland defenders we will stand up for Artsakh to the end. The life-and-death battle continues,” he said, using the Armenian name for Nagorno-Karabakh.

Energy-rich Azerbaijan has pressed home the advantage afforded by its superior weaponry, including high-tech drones bought from its chief ally, Turkey.

“The joy of our Azerbaijani brothers who liberated their occupied cities and Karabakh step by step is also our joy,” Turkish president Recep Tayyip Erdogan said on Sunday.

Turkey denies French and Russian allegations that it has sent fighters from Syria to Azerbaijan to support government troops. At the same time, however, it has echoed Baku in decrying three decades of fruitless negotiations and demanding that Armenian forces leave Nagorno-Karabakh now or face further attack.

Mr Erdogan spoke to Russian counterpart Vladimir Putin on Saturday, and unconfirmed media reports said the two regional powers were discussing ways to implement a ceasefire in the conflict zone, monitored by Turkish and Russian peacekeepers.