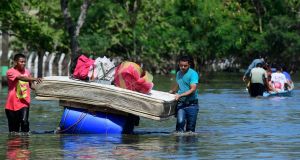 Tropical Storm Eta unleashed torrential rain on South Florida on Monday after making landfall in the Keys, flooding roads and residential neighbourhoods and knocking out power for thousands as it moved back over the Gulf of Mexico.

Eta, which was located 50km west-southwest of the Dry Tortugas and moving further into the Gulf, could cause life-threatening flash floods across urban parts of southeast Florida throughout the day, a National Hurricane Center advisory said.

In Broward County, on the southeast of the state’s peninsula, roads in residential and commercial neighbourhoods were entirely submerged in water, video on Twitter showed.

From her home in a residential neighbourhood of Weston, Florida, Danielle Taylor (26) saw people wading knee-deep along the street and rowing canoes down the block.

Ms Taylor, who was not among the more than 42,000 customers in Florida who had no power on Monday, according to poweroutage.us, said she had watched cars trying to drive down the inundated road. “They were struggling,” she said in a telephone interview.

Eta also was not finished in Cuba, where the storm continued to swell rivers and flood coastal zones on Monday. Some 25,000 people were evacuated with no reports of deaths, but rainfall continued.

Eta initially hit Nicaragua as a Category 4 hurricane and wreaked havoc from Mexico to Panama. Official death tolls totalled at least 68 people, but hundreds more were missing and many thousands were in shelters after flash floods tore through communities of improvised homes on unstable mountainsides.

In Florida, Eta made landfall on Lower Matecumbe Key, part of an archipelago off the state’s southern tip, just before midnight on Sunday as a strong tropical storm with maximum sustained winds of 100km/h.

The storm was projected to drop 5-10cm of rain on parts of south Florida on Monday, which would add up to isolated maximum totals of 18 inches of rainfall in some parts of the region, the NHC advisory said.

Eta was forecast to make a dip in a southwesterly direction on Monday before shifting back to the northeast by Wednesday, the NHC said. Though currently moving offshore, Eta could still pose a threat to Florida later this week, it said.

“Eta could approach the Florida Gulf Coast later this week as a tropical storm, and possibly bring impacts from rain, wind, and storm surge,” the advisory said. – Reuters/AP