Cohen returns to Congress to testify behind closed doors 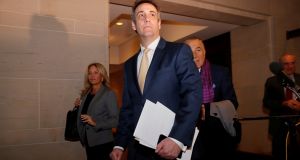 US president Donald Trump’s former lawyer Michael Cohen returned to Capitol Hill on Thursday to speak behind closed doors with a congressional panel investigating Russia’s interference in the 2016 US election, capping a week of testimony in which he levelled new allegations of wrongdoing at his former boss.

Mr Cohen did not respond to questions as he arrived for his third and final session in Congress this week. His private testimony before the House intelligence committee was expected to last into the evening. The panel has been investigating Russian election meddling and any collusion with the Trump campaign.

In dramatic public testimony on Wednesday before the House oversight committee, the one-time “fixer” for Mr Trump accused the president of breaking the law while in office and said for the first time that Mr Trump knew in advance about a WikiLeaks dump of stolen emails that hurt his 2016 election rival Hillary Clinton.

Committee chairman Elijah Cummings, a Democrat, said his panel would further investigate issues raised by Mr Cohen’s testimony and may try to get the president’s son, Donald Trump Jr, and his former accountant, Allen Weisselberg, to testify. “I think there are still a number of other shoes to drop,” Mr Cummings told reporters after the hearing.

Other Democrats said they would try to verify whether Mr Trump manipulated financial statements to reduce taxes and secure bank loans, as Mr Cohen alleged.

Two top Republicans on the committee, Jim Jordan and Mark Meadows, asked the justice department to investigate Mr Cohen for perjury, saying he lied during his appearance on Wednesday about his efforts to land a White House job and his work for two foreign companies, among other topics.

Mr Cohen has already pleaded guilty to lying to Congress. In 2017, he submitted a statement saying efforts to build a Trump Tower in Moscow had ceased by January 2016, when those talks in fact continued until June of that year, after Mr Trump had clinched the Republican presidential nomination.

Mr Cohen was sentenced to three years in prison for that lie and other crimes. Democratic House intelligence committee chairman Adam Schiff said in a tweet that on Thursday that he planned to dig into the Trump Moscow project, the revelations about WikiLeaks and any White House role in Mr Cohen’s prior false statements.

“Today Cohen provided the American public with a first-hand account of serious misconduct by Trump & those around him,” Mr Schiff said. “Tomorrow we’ll examine in depth many of those topics.”

At Wednesday’s hearing, Mr Cohen said Mr Trump never explicitly told him to lie to Congress about the Moscow skyscraper negotiations. But Mr Cohen said he believed he was following implicit directions to minimise their efforts on the tower.

Mr Cohen said he had no direct evidence that Mr Trump or his campaign colluded with Moscow during the election campaign, but that he had suspicions that something untoward had occurred.

Mr Cohen also testified privately before the Senate intelligence committee on Tuesday. Possible collusion is a key theme of special counsel Robert Mueller’s Russia investigation, which has dogged the president during his first two years in office. Mr Trump has repeatedly denied the allegation, as has the Kremlin. – Reuters