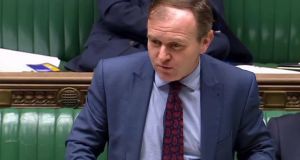 Agriculture minister George Eustice has resigned from Theresa May’s government in protest against her decision to give MPs a vote on delaying Brexit on March 14th if they reject her deal.

A veteran eurosceptic who has remained loyal to the prime minister, Mr Eustice said he would continue to support her withdrawal agreement.

In his resignation letter, he praised Mrs May’s tenacity and resilience but said she had been undermined by ministers and MPs who wanted to prevent Britain from leaving the EU. “Although I campaigned to leave, I have always supported compromise to achieve a reconciliation in our country. Leaving the EU would represent an historic change and it is natural that some people will feel apprehensive,” he wrote. “I have been open to the idea of using our existing membership of the EEA as an exit mechanism and I supported your approach outlined at Chequers when others did not. I have stuck with the government through a series of rather undignified retreats. However, I fear that developments this week will lead to a sequence of events culminating in the EU dictating the terms of any extension requested and the final humiliation of our country.”

Mr Eustice, who stood for Ukip in the 1999 European parliament elections before joining the Conservatives, said that taking a no-deal Brexit off the table would weaken Britain’s negotiating hand. And he accused the European Commission of failing to behave honourably during the negotiations.

“They have deliberately made progress slow and difficult. They have stated in terms that they will refuse to even hold substantive negotiations on a future partnership until after we leave. If the position of Parliament is now that we will refuse to leave without an agreement then we are somewhat stuck. This is uncomfortable for everyone, but we cannot negotiate a successful Brexit unless we are prepared to walk through the door,” he said.

Mr Eustice’s resignation followed Wednesday’s House of Commons vote backing the prime minister’s plan to bring her deal back for a meaningful vote by March 12th, and to give MPs a vote on leaving the EU without a deal by March 13th and on seeking an extension to the article 50 negotiating deadline by March 14th. The amendment passed by an overwhelming margin but 20 Conservative Brexiteers voted against it and a further 80 abstained, along with the DUP.

In her reply to Mr Eustice, the prime minister praised his work as an agriculture minister since 2011 and said she remained committed to leaving the EU on March 29th.

“I agree with you that Parliament must now come together and honour the referendum result by voting for a deal which will give businesses and citizens the certainty they need and deserve,” she wrote. “Our absolute focus should be on getting a deal that can command support in Parliament and leaving on March 29th. It is within our grasp and I am grateful to have your continued support in that important mission.”