London Letter: Leave-veering audiences to lose out to capital’s output 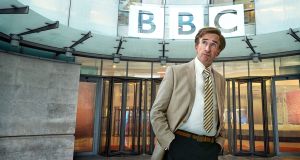 Steve Coogan as Alan Partridge: Dozens of presenters on commercial local radio stations are to lose their jobs, with hundreds more at risk. Photograph: Andy Seymour/BBC/PA

Like most British television comedy, This Time with Alan Partridge is anything but funny, it is a weary half-hour of obvious, laboured and inevitable gags. This didn’t prevent its first episode from winning an audience of more than three million and five-star reviews from critics, enraptured by what one described as Steve Coogan’s “tortured monster of insecurity and discontent”.

Coogan’s creation occupies a special place in the hierarchy of humour in Britain, a country where people will still recite Monty Python’s Dead Parrot sketch almost 50 years after it was first aired. Classic television comedy like Alan Partridge and Fawlty Towers can generate in Britain, more than anywhere else, what Emile Durkheim described as “collective effervescence”, an exalted sense of shared identity.

In the new series, Partridge has a job as a presenter on a dismal local radio station but is standing in for the co-presenter on a parody of BBC’s The One Show. Coogan said Brexit made it feel right to bring back Partridge, whose prejudices are just what London audiences associate with those who voted Leave in 2016.

The series opened the same week as Britain’s real-life Partridges, presenters on commercial local radio stations, heard that dozens are about to lose their jobs with hundreds more at risk. Global Radio announced that it would replace more than 40 local breakfast shows on its Capital, Smooth and Heart networks with just three national programmes broadcast from London.

Radio Today estimates that more than 95 presenters will lose their jobs, along with journalists, engineers and other staff. Global is closing 10 of its 24 local radio studios in Brighton, Cambridge, Chelmsford, Exeter, Gloucester, Kendal, Kent, Lancaster, Norwich and Swindon.

“The loss of more than 100 local radio jobs across the country is a travesty and particularly damaging at a time when local news is already under extreme pressure,” Labour’s shadow culture secretary Tom Watson said.

“Replacing local voices with London-based presenters will be a terrible loss to communities across the country. Radio has unique reach, providing listeners with national and local news and friendly company. This announcement is a terrible blow.”

Global’s decision follows new guidance from Ofcom (the broadcasting regulator) last October, reducing the weekday requirement of locally made programming from seven hours to three and removing the obligation to include breakfast in those hours.

Radio Today estimates that if Global and its main rival Bauer take full advantage of the new guidelines, the number of local radio presenters could fall by more than 250 with up to 70 per cent of Global’s presenters losing their jobs.

Earlier regulatory changes made it easier for stations to merge, with one serving an area that might previously have been covered by three. Ofcom’s guidelines allow commercial radio stations to introduce “hubbing” of newsrooms so that journalists no longer have to be based in the licence area. Stations that choose to network all but three hours of output each day must provide an “enhanced news service” during those three hours.

“The enhanced local news option gives stations the flexibility to reduce the number of local hours produced, should they wish to make associated cost savings. The provision of local news bulletins during daytime, as well as peak-time, helps to ensure that the station’s local content and identity is maintained during these daytime networked hours,” the guidelines say.

Ofcom insists that local bulletins “should not be merely tokenistic box-ticking exercises”, but there is no minimum duration for these bulletins as long as “at least one of the local stories in each bulletin needs to be directly relevant to listeners in each of the licensed areas”.

The Press Gazette reported in February a net loss of 245 local newspaper titles in Britain since 2005, with a net loss of 14 in 2018 leading to more than 200 job losses. Many of the local radio studios identified for closure are, like the lost newspapers, in parts of Britain that voted for Brexit.

If the referendum was, among other things, a revolt of provincial England against a metropolis that ignored its concerns, the centralisation of local radio programming can only deepen the malaise. And listeners in towns and cities across the country will lose another of their increasingly rare opportunities to experience collective effervescence.