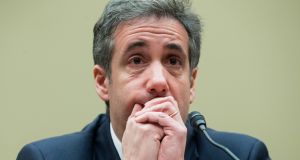 Michael Cohen, former lawyer to President Trump, before the House Oversight Committee in Washington. He denounced the president as a “conman”, a “cheat” and a “racist”. Photograph: EPA/Michael Reynolds

It remains to be seen if Wednesday’s public testimony by Michael Cohen before the House oversight committee in Washington becomes one of the most consequential days of the Trump presidency. But it was certainly one of the most dramatic.

For more than five hours Cohen gave a devastating account of the activities of Donald Trump during the 10 years he worked for him and since he entered the White House.

Gone was the aggressive posturing of the fast-talking Manhattan lawyer who once said he would “take a bullet” for his boss. Instead Cohen presented himself as the epitome of contrition, a man on the road to redemption who has seen the error of his ways.

In damning pre-prepared remarks he denounced Trump as a “conman”, a “cheat” and a “racist.” His testimony gave a rare insight into the workings of the Trump business empire, and the ruthless and dishonest tactics of the real estate businessman.

But the real import of the testimony was its implications for the various criminal and civil cases embroiling the president. Cohen made a series of allegations under oath that could place the president in further legal jeopardy.

Much of the substance of the allegations centred around the payment of hush money to two women who said they had had affairs with the president. While Cohen had previously pleaded guilty to arranging the payment, on Wednesday he gave further proof that the president directly ordered the payoffs, producing copies of two cheques he claims were made to reimburse him.

A second legal difficulty for Trump is Cohen’s claim that he had advance warning of WikiLeaks’ dump of hacked emailed from the Democratic National Committee. He says that he witnessed a phone call from Roger Stone informing the president that the email drop was coming.

While this does not prove that the Trump campaign colluded with Russia, it does suggest that Trump knew about the plan to leak the damaging emails, something he previously denied.

Similarly, Cohen alleges that he heard Donald Trump junior tell his father about the controversial Trump tower meeting of June 2016 – a key focus of the Mueller investigation.

Yet while Cohen’s testimony disclosed new information about some of the key moments of the Trump presidential campaign, his comments on other matters may prove more damaging for the president.

His allegations about Trump’s tax practices, accusing the president of inflating asset values in order to make the Forbes rich list, while decreasing their value for tax and insurance purposes, is likely to pique the interest of other congressional committees already eager to subpoena Trump’s tax records and other financial documents.

Donald Trump junior’s legal troubles may have also increased as Cohen revealed that one of the cheques written to reimburse him for the Stormy Daniels payment was signed by him.

While Cohen disclosed that he had been interviewed seven times by a special counsel team, he intriguingly implied that Trump was under investigation by the Southern District of New York for another matter.

It is not clear if this is related to recent reports of investigations into the Trump charity and the Trump inaugural committee fund.

The prospect of further investigations could be even more damaging to Trump than the Mueller investigation. While Trump is essentially protected from indictment while president, and impeachment would be a political decision, a federal investigation would follow him once he leaves office.

Reacting to the testimony in Hanoi a few hours after Cohen concluded, Trump unsurprisingly attacked the decision to have a “fake hearing” at the same time as the Vietnam summit. However, he noted that Cohen had not lied about “one thing”.

“He said no collusion with the Russian hoax.”

In this he is technically correct. Cohen said at the outset of his testimony: “Questions have been raised about whether I know of direct evidence that Mr Trump or his campaign colluded with Russia – I do not.”

But he stressed that it was more nuanced than that. “I have my suspicions.”

Ironically, Cohen’s failure to completely implicate the president in collusion – and his willingness to stand up for him on certain matters, stating, for example, that he would never strike his wife – arguably increases his credibility as a witness.

As with all trials that depend on criminals who have flipped and become key prosecution witnesses, ethical and credibility issues abound when it comes to the testimony of Cohen. But Trump may be regretting his break with a man who was once one of his closest aides.