Much rests on the Democrats as they face an immigration dilemma

US Politics: Can a party fluent in the argot of identity politics build a stronger welfare state? 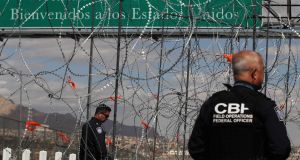 US Border Patrol members watch as barbed-wire barriers are installed ahead of the possible massive arrival of migrants, at the Zaragoza International Bridge on the US-Mexico border. Photograph: Herika Martinez/AFP/Getty Images

You have to admire the avoidance strategy. In recent years, Americans have fallen out over everything near, around and abutting legal immigration, without quite braving the subject itself.

The first squall was the ban on travellers from several Muslim countries. More recent controversies involve the undocumented migrants who were brought to the US as children and President Donald Trump’s totemic wall against Mexico. Each of these debates is worth having. But each also feels like a sheepish proxy for a harder one.

What is the proper level of legal immigration? More than a million people were given permanent residence in 2017. Not since the 1980s has the number been much lower on a consistent basis. Even if the US achieved total mastery of its borders, reducing unlawful entry to zero, it would still have to wonder if a million per annum is too much for national cohesion, too low for the exigencies of a job-creating economy or about right.

With no particular relish, I sense the future belongs to the first view. Expect a secular drop in immigration to America over time. Some of this is sheer cyclicality. The US alternates between openness and restriction, and it has been open for long enough to try voters’ patience. Some of it is the hardening of the once economically liberal Republican party, once so tolerant of immigration. Trump has tightened visas. International graduate student applications have fallen for the second consecutive year.

Much rests, then, on the Democrats. It is natural to assume their enthusiasm for current or even higher levels of immigration. The party is fluent in the argot of identity politics. It opposes the wall. Some of its presidential candidates question border enforcement as currently constituted. Again, however, these things are germane to, but not quite the same as, formalised immigration. On that subject, the party is conspicuously terse. We do not know what it regards as a sensible annual number, or whether it thinks government should take a view at all. What we do know is that it has other priorities, and these might be easier to realise against a background of steadily falling immigration.

One of them is the naturalisation of some of the 11m undocumented people in the US. The equivalent of the entire state of Ohio is currently barred from full participation in civic life. Each case is a graver moral problem than the rejection of, say, a foreign graduate, who might be spoilt for alternative destinations (Canada is popular).

Theoretically, it is possible to naturalise at least some of these millions and maintain immigration on its current scale. The two are not opposed in logic. But they are almost certainly opposed in political doability. Democrats cannot sell Republicans on a “path to citizenship”, and the non-construction of a wall, and immigration at present levels, all at once. Some give is needed. Considering the toxicity of the wall among the left, the trade-off seems plain.

Another Democratic project is the expansion of the welfare state. The US has tended to build it up only during times of low immigration. The New Deal of the 1930s is a case in point. The Great Society of the 1960s coincided with a foreign-born population of about 5 per cent (versus 14 per cent now). True, George W Bush extended Medicare amid high immigration, but it was an anomalous act, not part of a sustained programme or movement. European democracies worry about the same tension between openness and redistribution: will citizens underwrite each others’ livelihoods if not much connects them?

No doubt conservatives will be abdomen-bruised with laughter at the idea of Democrats cutting immigration. They believe the party has an electoral strategy that joins liberal whites to ethnic minorities, damn the rest.

But this rather assumes that all minorities favour immigration. In fact, a quarter of Latino voters say it is too high: fewer than a decade ago, but still a number to reckon with. Note that Trump’s squeeze on legal migration passes with little Democratic outrage. Note, too, that Bernie Sanders, a party hero, is of the old left, and has questioned liberal borders before.

Nothing in US history suggests that immigration can remain indefinitely high. A downward trend is likely and there is a progressive way of managing it. We will give the country a breather from the present flow, Democrats can say, in return for dignity for those already here, and a sturdier safety net for all Americans. If the phrase were not so gruesomely freighted, they might call it nation-building. – Copyright The Financial Times Limited 2019