Cohen tells Congress Trump a racist, a con man and a cheat 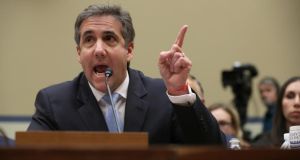 Donald Trump’s former personal lawyer long-time fixer Michael Cohen delivered a devastating account of the US president in his first public testimony to Congress on Wednesday, describing his former boss as a racist, a con man and a cheat.

Mr Cohen, who is due to testify behind closed doors to the House Intelligence Committee on Thursday was grilled by legislators from both political parties throughout the day on Wednesday.

In pre-submitted remarks he said that while he had previously lied to Congress in written testimony, “today, I’m here to tell the truth about Mr Trump”.

Mr Cohen told the panel that Mr Trump had written him checks as reimbursement for hush money he had paid to adult film star Stormy Daniels and that these payments had been made over 12 months to hide their real purpose. A copy of one cheque shown to the committee had been signed by Mr Trump’s eldest son, Donald jnr.

He also alleged that Mr Trump was given advance knowledge of WikiLeaks’ drop of damaging emails about the Democratic National Committee by Roger Stone in a phone call – testimony that contradicts Mr Trump’s statement that he knew nothing about the email hack.

His testimony also contained devastating allegations about Mr Trump’s behaviour before he became president. Mr Cohen described the president as racist, recalling an incident in Chicago when both men were driving through a deprived neighbourhood and Mr Trump said that black people would never vote for him because they were “too stupid”.

He also alleged that Mr Trump had used money from the Trump charitable foundation to pay for a portrait of himself bought by a pre-arranged bidder at an auction.

Though Mr Cohen declined to comment specifically on the ongoing Mueller investigation into Russian interference in the 2016 election, he said he had been interviewed seven times by the special counsel’s team.

Republicans aggressively questioned Mr Cohen throughout the testimony, questioning his credibility and repeatedly noting that he was a convicted felon.

Republican Mark Green called the 52-year-old “a narcissist, a bully who cannot tell the truth about the president or his own life”.

But Mr Cohen hit back, telling his questioners that he was taking responsibility for his actions.

“I regret the day I said ‘yes’ to Mr Trump. I regret all the help and support I gave him along the way,” he said. “I am ashamed of my own failings, and I publicly accepted responsibility for them by pleading guilty in the Southern District of New York,” a reference to the Manhattan court which last year convicted him to three years in prison.

Mr Cohen was also probed about Mr Trump’s involvement in a plan for a Trump Tower hotel in Moscow. The former lawyer previously pleaded guilty to lying to Congress in written testimony about the timing of the project, claiming that negotiations on the hotel finished in January 2016 when they in fact continued into the summer.

On Wednesday he testified that Mr Trump had asked him “at least a half-dozen times” between January 2016 and when he was selected as the Republican presidential candidate how the Russia project was progressing.

Mr Cohen said the billionaire businessman had never expected to win the election, and saw the presidential campaign as a “marketing opportunity”.

“Donald Trump is a man who ran for office to make his brand great, not to make our country great. He had no desire or intention to lead this nation – only to market himself and to build his wealth and power. Mr Trump would often say: ‘This campaign was going to be the greatest infomercial in political history.’”