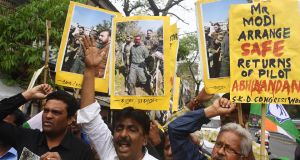 Pakistan says it will on Friday repatriate an Indian fighter pilot shot down and captured by the Pakistan Air Force earlier this week, in a bid to reduce tension between the nuclear-armed neighbours.

“As a peace gesture we will be releasing him tomorrow,” Pakistan’s prime minister, Imran Khan, told his country’s parliament on Thursday, as he repeated his call to “de-escalate” the prevailing volatile security situation in the region.

“India and Pakistan have to live in peace,” Mr Khan said, but he warned his country’s larger neighbour against testing Islamabad’s limits.

Pakistan’s decision to return the detained pilot has considerably soothed tension between the two sides, after their engagement in an aerial dogfight on Wednesday, during which two Indian aircraft were shot down over the disputed Himalayan territory of Kashmir.

This led to wing commander Abhinandan Varthaman of the Indian Air Force bailing out and being seized by the Pakistani military and held prisoner.

It was unclear on Thursday what had prompted Pakistan to adopt a newly-conciliatory stance, but senior Indian diplomats speculated that the change may have been induced under US pressure.

Earlier on Thursday, US president Donald Trump had provided an indication of Washington’s role in defusing the crisis, when he declared in Hanoi – where he was meeting North Korean leader Kim Jong-un – that “reasonably attractive news” would imminently emanate from India and Pakistan, but did not elaborate.

“I think it [the confrontation] is going to end. It’s been going on a long time,” Mr Trump said, referring to the enduring tension between the neighbouring states, which have fought four wars since independence 72 years ago. Three of these have been over Kashmir, which is divided between the two, but claimed in its entirety by both.

This perennial hostility resurfaced after the Indian Air Force conducted an air strike on a militant camp inside Pakistan on Tuesday in retaliation for a suicide bombing that killed some 40 Indian soldiers in Kashmir on February 14th.

The Pakistan-based Islamist Jaish-e-Mohammad (JeM) claimed responsibility for this attack, one of the deadliest in three decades of the Muslim insurgency in Kashmir, in which more than 73,000 people had died.

Pakistan denied all involvement in the February 14th bombing, and after the Indian air strike declared it had no alternative but to retaliate. Thereafter its fighters launched an attack on a military installation in Indian-administered Kashmir, which led to the aerial combat and the Indian pilot’s apprehension.

Indian prime minister Narendrda Modi on Thursday urged his countrymen to “unite, fight, live, work and win as one” and stand like a rock against all enemies, a euphemism for Pakistan.

“Every Indian should stand like a wall in the face of an enemy seeking to destabilise the country,” he declared while interacting with more than 10 million of his Hindu nationalist Bharatiya Janata (BJP) cadres in some 15,000 locations via video link.

“When the enemy tries to subvert India through a terrorist attack, their motive is to stop the country’s progress,” he said, but without naming Pakistan.

Senior Indian military officers addressed a press conference for the first time in Delhi on Thursday evening in which they forcefully contradicted Pakistan’s claims with regard to its alleged role in sponsoring the Islamist militancy in Kashmir.