‘Sometimes you have to walk,’ says US president as talks with North Korea collapse 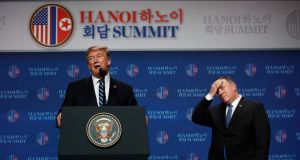 US president Donald Trump speaks as Secretary of State Mike Pompeo looks on during a news conference after a summit with North Korean leader Kim Jong Un in Hanoi on Thursday. Photograph: Evan Vucci/AP

The curtailed summit – which concluded two hours early without a joint signing ceremony – was an astonishing outcome to the highly-anticipated meeting between the two leaders.

According to the US president, who delivered a solo press conference following the breakdown of talks, the agreement faltered because North Korea wanted all sanctions lifted in exchange for closing just one nuclear facility.

“Sometimes you have to walk, and this was just one of those times,” he said.

As Washington awoke to the news on Thursday morning, the overriding response in some quarters was one of relief.

Many had feared that Trump was prepared to sign up to any deal in order to claim a diplomatic victory.

In the days leading up to the summit the president seemed to have lowered the bar in terms of what the US was prepared to accept from North Korea, stressing that there was no rush to deliver denuclearisation.

Awaking to the news that Trump had walked away from a below-par agreement, the Brexiteers’ mantra that “no deal is better than a bad deal” was embraced by many.

But in truth the collapse of the Hanoi summit points to a major diplomatic failure by Trump.

Since assuming office, the US president has implemented a foreign policy premised on a blind trust in his own ability to overcome major international difficulties through the force of his own personality and through forging personal bonds with other leaders.

But his talk of a “beautiful” relationship with a North Korean dictator he barely knows was not enough to overcome the enormous challenges of tackling the North Korean nuclear threat.

The key issue now is what happens next? North Korea and the United States have been in something of a holding pattern since Trump and Kim held their first summit, in Singapore, last June, with Pyongyang refraining from the nuclear testing that rattled the world in the summer and autumn of 2017.

US officials believe that North Korea still has up to 65 nuclear weapons – a reality that undermines Trump’s claim after the Singapore summit that the country is no longer a nuclear threat.

While diplomatic channels appear to still be open, with the prospect of a third Kim-Trump summit still a possibility, it is unclear where things go from here.

Arguably North Korea has come out of the summit with more wins than the United States. Trump indicated at his press conference that annual joint military exercises with South Korea will not take place again this spring – a win for Pyongyang.

Kim can also take comfort for the fact that he has become the first leader of North Korea to meet with a sitting US president, meetings that have served to confer a legitimacy on his regime.

Similarly, Trump said he took Kim’s word that he didn’t know about the treatment of American student Otto Warmbier, who was tortured while in prison in North Korea and died six days after his return to the US in 2017.

The role of South Korea will be crucial going forward.

South Korean leader Moon Jae-in has played a crucial role in the increasing dialogue between Washington and Pyongyang over the last year or so, and has invested a huge amount politically in the thawing of relations.

Similarly, Tokyo will be closely watching Pyongyang’s next move given its geographic proximity to the nuclear state.

The collapse of the talks also raises questions about the real purpose of the trip, given its enormous costs and time demands.

Why the president undertook a 20-hour flight to Hanoi only to see the talks collapse over an issue that could have been clarified by officials in preparatory talks, raises questions about his motivation.

The outcome suggests Trump is more attracted by the pomp and ceremony of an international summit than the details of international negotiations.

He arrives back to a Washington absorbed by the import of Michael Cohen’s testimony this week and the imminent conclusion of the Mueller investigation, and with nothing to show for his talks with Kim Jong-un.

Resolving a conflict that he had hoped would become his signature foreign policy achievement seems as far away as ever.