Europe Letter: Focus on Brussels to see if bloc is willing or able to bear an influence 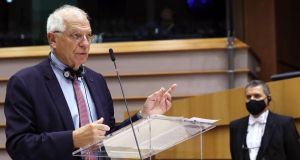 As a group of office workers in the Brussels bubble prepared to wind down for the weekend last Friday, an email appeared in their inboxes that made them sit up. It was a note from a colleague announcing he was taking a leave of absence to go to war.

His native Armenia had declared martial law and universal military mobilisation of able citizens aged over 18. He had been summoned to serve his nation, he wrote, “and I proudly take it as an honour”.

This jolt to the heart of Brussels sums up how the burgeoning conflict between Armenia and Azerbaijan has implications that reach across Europe.

This is because the dispute – though it centres on a remote region with the unfamiliar name of Nagorno-Karabakh – involves the interests of a knot of large military powers that are already set against each other in theatres of conflict elsewhere.

The conflict has its roots in the collapse of the Soviet Union in the 1980s, when the ethnic Armenian majority in Nagorno-Karabakh began agitating to become part of Armenia or be independent, despite the territory coming to be internationally recognised as part of Azerbaijan.

The ensuing war killed tens of thousands. Sporadic clashes between the two neighbours have continued since a peace deal was reached in 1994, with Moscow maintaining regional dominance and selling weapons to both sides.

Nato member Turkey has an interest too, sharing close ethnic ties with Azerbaijan, as well as mutual antipathy towards Armenia. This week Turkish foreign minister Mevlüt Çavusoglu travelled to the capital, Baku, to express solidarity with Azerbaijan as it sounded a martial note.

The policy reflects the increased assertiveness of the regime of Turkish president Recep Tayyip Erdogan from Cyprus to Libya to Syria, as it seeks leverage over rivals and increased influence across a region where it historically held sway. Its involvement in the latest conflict opens up yet another area in the EU’s neighbourhood in which Turkey and Russia are on opposite sides of a proxy fight.

“There is a coming collision course between Turkey and Russia in this region. Turkey has been forced out as a player in the region years ago by Russia ... Turkey sees an opportunity geopolitically to regain its lost role,” says Richard Giragosian, director of the Armenia-based Regional Studies Center.

“Erdogan is very much the same kind of authoritarian risk-taker as Vladimir Putin. Clash of the titans, or clash of the titanic egos,” he adds. “This is the inherent threat to Europe, which is already unprepared to deal with Victor Orban in Hungary, and these authoritarian strongman policies.”

Meanwhile, there is the matter of Armenia and Azerbaijan’s other neighbour: Iran, which is home to communities with origins in both.

Tehran has complained of rocket fire and bullets spilling into its territory from the fighting. On Wednesday, Iranian president Hassan Rouhani issued a warning that it would not tolerate “terrorists” on its borders following reports that Turkey had moved Syrian mercenary fighters into Azerbaijan.

“We must be careful that this war does not turn into a regional war and those who pour gasoline on this war should pay attention that its continuation is not in the interest of any country,” Rouhani said in a statement issued by the government.

Each power involved may feel compelled to intervene to protect their interests, a combination that has drawn comparisons to the domino effect that caused the assassination of an archduke to lead to the first World War.

With the United States distracted and in a phase of withdrawal from overseas concerns, attention has turned to Brussels to see if the European Union is willing – or able – to bear an influence to prevent deepening instability in what it refers to as its “eastern neighbourhood”.

The bloc quickly called for peaceful dialogue and released €500,000 in humanitarian aid for the civilian populations affected by the fighting on both sides.

But on Wednesday, EU chief diplomat Josep Borrell faced calls to do more as he was summoned to give an account of the European Commission’s response by the European Parliament.

The debate began with an intervention by Cypriot MEP Lefteris Christoforou, who appealed for an immediate response to a new incursion into a disputed area of the divided island by the Turkish side. One after another MEPs called for the EU to do more. But Borrell responded with characteristic frankness about the hard power limitations of the bloc.

“All of you have been asking to act, but I have heard very few concrete versions of the verb ‘act’. What do you mean by ‘act’?” Borrell asked the MEPs. The bloc’s response to the Nagorno-Karabakh conflict, he explained, would be what had been agreed by the national leaders of the EU: to support the OSCE Minsk Group, the mediating body that has sought to broker peace between Azerbaijan and Armenia since 1992.

This means “a negotiated solution, pushing both sides to stop the fighting, and especially putting pressure on Turkey to not continue to intervene”, Borrell summarised. “But to ‘act’ – if you mean by ‘act’ taking military action – is completely out of the question.”