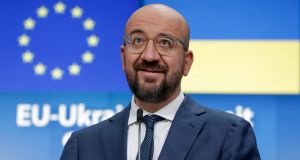 European Council president Charles Michel said, after his call with Boris Johnson, that it was ‘time for the UK to put its cards on the table’. Photograph: Stephanie Lecocq/EPA

Boris Johnson has spoken to European Council president Charles Michel amid signs that Britain is ready to compromise on one of the most important areas of disagreement in talks on its future relationship with the EU. Mr Michel said after the call that the EU wanted a deal “but not at any cost”, adding that it was “time for the UK to put its cards on the table”.

The call came as Britain’s chief negotiator David Frost signalled that the two sides had moved closer on state aid, or control of subsidies to business.

“After a long period in which we’ve been making little progress on subsidy policy we are having somewhat more constructive discussions on that subject, although unfortunately the gap between us is still pretty wide and a lot of work has to be done,” he told the House of Lords EU committee.

“We’re beginning a discussion, is it possible to go further than normal in an FTA [free trade agreement] and agree some provisions that shape and condition subsidy policy on both sides”.

Until now, Britain has refused to offer more than the scantest detail about its planned subsidy regime after the post-Brexit transition period ends on December 31st. The EU wants the parameters of that policy to be written into the agreement, along with the terms of an independent British regulator and a UK-EU dispute resolution mechanism.

Lord Frost said Britain would not write into a treaty with the EU “extensive text setting out detail of how we design our system” but he said Britain could benefit from dispute resolution measures with the EU on state aid.

“I can quite see us being ready to use them just as much as the EU in future. Other EU countries subsidise quite often more than we do and that could definitely have impact on us,” he said.

He noted that France and Germany had historically subsidised businesses much more than Britain during its EU membership.

“I still find it a bit strange that this issue has loomed quite so large given the track records on both sides, but there we are. We will be in new situation after transition and the EU must come to conclusions about what it wants,” he said.

“Whether we can satisfy that I don’t know yet. It is quite difficult to agree the level of detail they want to see.”

Cabinet office minister Michael Gove told the committee he understood why the EU was taking legal action against Britain over the Internal Market Bill, which would allow ministers to override parts of the withdrawal agreement. He did not rule out dropping the treaty-breaking clauses from the Bill if the joint committee overseeing the implementation of the Northern Ireland protocol resolved issues of disagreement.

“We’ll wait and see what happens in the negotiations,” he said.

EU negotiators are in London this week for an informal round of talks with their British counterparts and formal negotiations are due to continue in Brussels next week ahead of the European Council on October 15th.