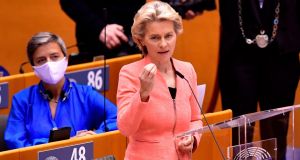 Wednesday was Ursula von der Leyen’s moment to set out her vision for the European Union and how it could emerge from the coronavirus pandemic fit for the future. Her message to the member states was: we can be as ambitious as you choose to be.

The state of the union is an annual address given to the European Parliament by the president of the European Commission, a set-piece on the Brussels calendar in which they set out their ambitions for the coming year.

Rarely are they given in such trying circumstances: amid an economic contraction of historic scale, with multiplying challenges on the EU’s borders, and during an ongoing pandemic that was in evidence through physical distancing and ubiquitous face masks.

Von der Leyen began her address by paying tribute to frontline workers, doctors, nurses and careworkers, prompting applause as she acknowledged that they “took risks so most of us didn’t have to”.

The way out of the crisis, she proposed, was to invest in the future. This meant increasing the bloc’s emissions reductions target to 55 per cent from 40 per cent, and investing heavily in green initiatives that would boost the economy while moving the continent towards its goal of carbon neutrality by 2050 to ward off catastrophic climate change.

The landmark agreement of €750 billion in shared borrowing reached earlier this year was an opportunity to do just this, she said.

Delivered in English, French and German, the speech was wide-ranging, touching on the need for more health co-operation, fast broadband to allow rural areas to develop, fair pay for workers in the form of minimum wage agreements, and a common EU system for dealing with migration.

On this topic, von der Leyen name-checked Syrian teenager Suadd Alshleh, who won a scholarship to study medicine last year after arriving in Ireland aged 14. (The Royal College of Surgeons Ireland student found out when her university sent her a link to the video clip, and she told The Irish Times her parents were “super-proud”.)

When it came to international affairs, it was noticeable how many of the relationships mentioned were troubled, from Turkey, to Russia, to China. Even with old allies the United States and Britain, von der Leyen said, there was a need for “new beginnings with old friends”.

The EU chief vowed that the bloc would “never backtrack” on the withdrawal agreement, which had been jointly designed between the EU and UK as “the best and only way for ensuring peace on the island of Ireland”.

Perhaps the most striking section of the address was when von der Leyen paid tribute to the late Nobel laureate and former SDLP leader John Hume. In a section of the speech in which she condemned discrimination and urged the building of “a truly anti-racist union”, she quoted Hume’s words that “difference is the essence of humanity”.

“If so many people live in peace today on the island of Ireland, it is in large part because of his unwavering belief in humanity and conflict resolution,” von der Leyen said, describing Hume as “one of the great Europeans”.

It was a pointed inclusion of Northern Ireland and its peace process in the story of the EU at a time when people there are facing potentially dire consequences as the result of Britain’s vote to leave the bloc, and it felt very deliberate.

Throughout the speech, von der Leyen made the limits of her power clear. The commission can propose the way forward, but nothing can happen without the backing of the EU’s member states.

On migration reform, the commission would do its part, but member states must “to step up too”. She appealed to the national capitals to make it easier for the EU to form common foreign policy positions by replacing the requirement for unanimity with qualified majority voting, or 55 per cent approval.

“What holds us back? Why are even simple statements on EU values delayed, watered down or held hostage for other motives?” von der Leyen asked. “When member states say Europe is too slow, I say to them be courageous and finally move to qualified majority voting.”

Within hours of her speech, her point was made for her. Despite her heartfelt words of solidarity to the people of Belarus, ambassadors of the 27 EU member states struggled to agree to sanction the repressive regime of Alexander Lukashenko.

The Belgian MEP Guy Verhofstadt summed it up in a tweet. “I suggest you repeat your speech in the European Council, ” he told her. “Where half of the issues mentioned . . . are blocked.”

Von der Leyen finished her speech with a message: member states, it’s over to you.