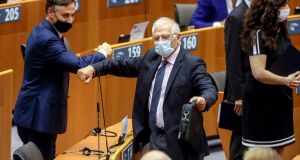 Josep Borrell (centre) in the European Parliament. “I just really find it difficult to understand. I can’t explain this to anyone, not in Brussels and not in Germany.” Photograph: Olivier Hoslet/EPA

David McAllister describes himself as “a German politician with a British background”.

The son of a Scottish soldier who married a German woman in the wake of the second World War, McAllister has been an MEP for Angela Merkel’s Christian Democratic Union party since 2014. He serves as the chair of the European Parliament’s United Kingdom Coordination Group, which monitors negotiations with Britain.

This has made McAllister one of the go-to figures to approach to explain Brexit matters to the German public.

“I’m in the German media every day, I’m always ‘Uncle Brexit’,” McAllister told the Irish Times. But the UK’s latest move has him stumped.

“I just really find it difficult to understand,” he said. “I can’t explain this to anyone, not in Brussels and not in Germany.”

The bill currently making its way through the the British houses of parliament would allow London to reverse aspects of the Withdrawal Agreement signed last year, in what the government has acknowledged would be a breach of international law.

With just weeks remaining to conclude a deal between the UK and EU, the introduction of the bill was seen in Brussels as a provocation, and one that profoundly damaged trust. That’s true even for allies of the UK like McAllister, who had long argued for a generous deal for Britain and acted as an go-between for London, Brussels and Berlin.

“It came out of the blue,” he recalled. “Everyone was saying ‘Wow, what’s going on now?

“I deeply regret Brexit. I think it’s a historic mistake, and hardly ever has a political event to be honest made me so sad. Even though Britain wasn’t always an easy member of the EU, I always said an EU of 28 members with the UK was better than without,” McAllister explained.

“But after the referendum, I said we must accept this decision and now we have to make the best of it. I argued in favour of offering the British something never offered before, access of goods, tariff-free to the single market, the world’s largest consumer market.”

When asked whether he felt betrayed by the latest move by London, McAllister paused.

“This is about the credibility of the United Kingdom in the international scene,” he responded. “If they don’t stick to their obligations, to a mutually, painstakingly negotiated agreement, what can you expect next? That’s why even moderate people like me are saying this is not good.”

Almost the entire European Parliament with the exception of the far-right is united in opposition to Britain’s move.

“From the far left to the centre right, we all agree that this is serious and that this is undermining trust at a crucial stage in the negotiations. If the UK continues to breach or threaten to breach the Withdrawal Agreement, we won’t be able to ratify an agreement on future relations. We have to be very clear.”

The Brexit saga provided a kind of crash-course in Irish politics and history for people across the continent. Chancellor Merkel visited Ireland to sit down with people who live along the Border and develop a personal understanding of the situation in 2019.

“Every politician in continental Europe dealing with this issue fully understands what’s at stake with Good Friday Agreement and stability in Ireland,” McAllister said.

The MEP has visited Ireland too: he once attended a Fine Gael party event, something he described as a “wonderful” experience that Germans could learn from.

“They were all dancing and celebrating until early in the morning,” McAllister recalled. “German party meetings are very sincere, very German, we discuss policy for hours, make long speeches and then go home.”

The dramatic events that led up to the signing of the Withdrawal Agreement last year were covered extensively in German media, and McAllister believes that it is widely understood in Germany that prime minister Boris Johnson has turned on his own agreement.

“Most Germans watching the evening news in the end knew something about the backstop. That was a new word, backstop, that entered even the German political language. We still remember in Germany prime minister Johnson didn’t want the backstop, he wanted something else,” McAllister recalled.

“Now it’s his own government saying ‘No, sorry we don’t’... what is this? Behind the scenes there is a lot of head shaking,” he said. “It was the British who came up with this idea.”

The strange course of events is summed up for Mr McAllister by a line in the recent state of the union speech by European commission president Ursula von der Leyen.

“Britain does not break treaties. It would be bad for Britain, bad for relations with the rest of the world, and bad for any future treaty on trade,” she said, quoting none other than former British prime minister Margaret Thatcher.

“Who would think the European Union would be quoting Margaret Thatcher?” McAllister marvels. “This just shows how odd the debate has become.”