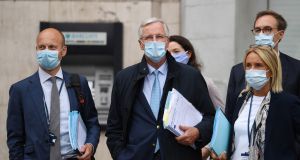 EU’s chief negotiator Michel Barnier and entourage: There is dismay that London has dragged the intractable Northern Irish issue back into the talks. Photograph: Neil Hall

It was widely expected in Brussels that Britain would up the ante ahead of this week’s round of talks with the European Union. Declarations about sovereignty and praise for a crashout exit were very much priced-in.

What was not anticipated is that the London government would declare an intention to break international law.

The six words of Britain’s Northern Ireland secretary Brandon Lewis to describe his government’s proposed Bill – “Yes, this does break international law” – caused consternation across Europe. It’s not just a problem for the Brexit talks: it goes against an underlying assumption of western foreign policy and the international order.

“I come from a Commonwealth country, we have so often in our recent history looked to the UK as an example of how an old and evolved democracy should function on the world stage,” the Maltese Christian Democrat MEP Roberta Metsola told The Irish Times.

“This is not an inconsequential statement. I can understand the argument that it would be difficult for the UK to remain the trusted international powerhouse it has always been.”

Britain itself relies on the principle of “pacta sunt servanda” or “agreements must be kept”, all the time. Only last week, foreign secretary Dominic Raab deplored the poisoning of Russian opposition politician Alexei Navalny as “utterly deplorable and a violation of international law”.

The tenet that treaties made with others cannot lawfully be changed by just one side has built up our world order over hundreds of years. Spain barely disguises its disdain at Britain’s retention of Gibraltar, but it was agreed in the Treaty of Utrecht in 1713.

Observers have questioned whether this is a case of prime minister Boris Johnson or his adviser Dominic Cummings flaunting a bit of game theory and deploying the “madman” strategy associated with US president Richard Nixon.

The strategy works by convincing an adversary that you are unhinged and they should appease you as you are capable of anything. In this instance, however, the threats the UK wields – whether torpedoing its own international reputation or tanking its economy through no deal – are viewed by the EU as primarily self-harm. So it’s not clear the strategy applies.

“It raises the question: is this deliberate? Or policymaking on the fly, and they just didn’t expect this reaction,” mused Rem Korteweg, senior research fellow at the Dutch international relations and diplomacy body the Clingendael Institute.

“Both are really problematic. I don’t know which one is worse: the deliberate cynicism or the incompetence.”

EU leaders are determined to retain an outward calm in the face of a move they fear was calculated to freak them out. But privately they are rattled. In meetings before he travelled to London to resume talks, the EU’s chief negotiator, Michel Barnier, is said to have let slip his diplomatic poise. “He was really upset,” one interlocutor recalled.

There is dismay that London has dragged the intractable Northern Irish issue back into the talks. Weariness and exasperation have crept in. For the individuals involved, tearing up the Withdrawal Agreement means reversing years of their work.

“I mean, we negotiated painstakingly every single word of that Withdrawal Agreement,” reflected Maros Sefcovic, a Slovak diplomat who oversees the implementation of the 2019 deal for the European Commission.

“You know, the document was a dense one. It was intense diplomatic and legal work integrated into this agreement, which I would repeat, was signed by the prime minister, Johnson, and ratified by the parliament. For us it is a matter of principle.”

There is much puzzling over how the move fits with Britain’s self-interest. International law renegades do not typically declare that they are breaking the law. They leave that to their critics to prove, while strenuously arguing their innocence, the better to get away with doing what they want.

In addition, a long-held argument of British negotiators is that the EU side treats the country as unfairly suspect and that it deserves more trust. On the issue of state aid, London has insisted that the guarantees sought are over the top, arguing that the UK does not have a past record of generously subsidising industry. Likewise, London has responded to the EU’s request for human rights commitments with a tone of affronted pride, as if to say “this isn’t Saudi Arabia you’re dealing with”.

An open declaration that, in fact, nothing can be taken on faith, will only strengthen the EU’s determination to seek binding agreements on every detail in a way that London will not like. Realistically, about five weeks remain to reach a deal. The prospect is receding.

Neither side may want to be the first to walk away from the talks and risk carrying the blame for the fallout. But if Britain follows through on reversing a prior agreement, some argue this will make it impossible for the EU to continue talks to pursue a further one.

“This would be a serious, serious violation of our relations,” said Bernd Lange, a German social democrat MEP who chairs the European Parliament’s international trade committee. “If they are really going in this direction, I think we have to break the negotiation and rebuild trust in their observance of the law.”