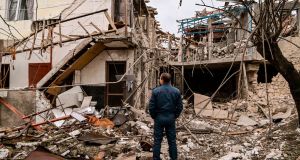 A police officer stands in front of a destroyed house after shelling in the breakaway Nagorno-Karabakh region’s main city of Stepanakert on October 7th, during the ongoing fighting between Armenia and Azerbaijan over the disputed region. Photograph: Aris Messinis/AFP via Getty

Russia, the European Union and Iran have called for an end to fighting between Armenian and Azerbaijani forces over the disputed area of Nagorno-Karabakh, amid warnings that the conflict in the south Caucasus could spiral into a regional war.

More than 300 people have been killed in 11 days of fighting around the mountainous province of Azerbaijan, which has been run by its ethnic Armenian majority and propped up by support from Armenia since a war in the early 1990s.

Armenia says it is ready to hold talks and make concessions if Azerbaijan will do the same, but Baku – with staunch support from Turkey – is demanding the withdrawal of all Armenian forces from what it calls occupied territory.

While trying to maintain good relations with Yerevan and Baku, Russia has a military base in Armenia and a long-standing agreement to defend it from foreign attack.

Russian president Vladimir Putin spoke to Azeri counterpart Ilham Aliyev and Armenian prime minister Nikol Pashinyan on Wednesday. He insisted that Moscow would fulfil all its treaty obligations – but emphasised that the conflict was taking place not on Armenian territory but in a contested region of Azerbaijan.

“We hope this conflict will be over very soon,” Mr Putin said. “And if it’s not resolved completely – which looks a long way off – then in any case we call for . . . a ceasefire, and this needs to be done as quickly as possible.”

Russia and France have joined Armenia in condemning the alleged arrival via Turkey of Syrian “jihadists” to bolster the Azeri ranks.

“Turkey has also transported mercenaries and terrorists from the territory of Syria to the conflict zone which is changing the whole context . . . This is becoming essentially Nagorno-Karabakh and Armenia’s struggle against international terrorism,” Mr Pashinyan told Sky News.

French foreign minister Jean-Yves Le Drian said the “military involvement of Turkey . . . threatens to lead to the internationalisation of the conflict”. France, Russia and the United States would discuss the fighting in the coming days in Geneva and Moscow, he added.

Turkey and Azerbaijan deny drafting in Syrian fighters and Ankara says its military is not directly assisting Baku.

During a visit to the Azeri capital this week, however, Turkish foreign minister Mevlut Cavusoglu declared: “There should be no doubt that, when needed, we will act like one state. Turkey is Azerbaijan, Azerbaijan is Turkey.”

President Hassan Rouhani of Iran, which neighbours Armenia and Azerbaijan, said on Wednesday his country would not allow “states to send terrorists to our borders under various pretexts.”

“We must be attentive that the war between Armenia and Azerbaijan does not become a regional war,” he added.

In Brussels, meanwhile, EU foreign policy chief Josep Borrell said “the only solution is to go back to the negotiation table . . . It is important that regional actors refrain from any activity or rhetoric that could inflame things even further.”

1 Shops, hairdressers and hotels expected to reopen next week
2 Stir-crazy Dutch holidaymakers set to descend on Caribbean island
3 Miriam Lord: Unity and common purpose in spades but not for Covid fight
4 Joe Biden does not want to see guarded Border in Ireland after Brexit
5 Covid-19: Museums, cinemas set to reopen next week as Varadkar warns of New Year restrictions
Real news has value SUBSCRIBE