EU plagued by erosion of democracy inside and outside its borders

Europe Letter: A row is brewing over the best way to tackle brazen flouting of rule of law 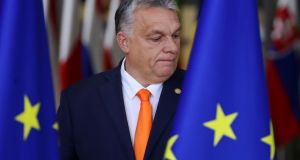 “The natural disadvantage of democracy is that it is extremely tiring to those who mean it honestly, while it allows almost everything to those who do not take it seriously.”

The quote by the writer Vaclav Havel, a dissident and political prisoner who rose to become the first president of the Czech Republic, is a favourite of the Czech commissioner Vera Jourova.

Jourova described the quote as “timely” as she recited it at the launch of the European Commission’s first rule-of-law report on Wednesday, a study of each member state that charted slippages in democratic norms, particularly in eastern Europe.

Jourova, a lawyer and politician who is the the face of the European Commission’s efforts to tie European Union funds to requirements to respect the rule of law, often draws on her own experience growing up in communist Czechoslovakia to make her case.

“When the rule of law is absent, when it is at risk, there is a concrete impact on every single one of our lives. I know this first hand because I myself grew up in an authoritarian regime without the rule of law,” she told journalists on Wednesday.

“This means that equality before the law was an illusion. There were people more equal than others. The politically appointed judges didn’t serve justice. The media broadcasted propaganda in the service of the ruling party.”

Havel’s description of democracy as “tiring” took on a new meaning for some of the journalists and political junkies following the launch, some of whom had stayed up to watch the US’s presidential debate at 3am Brussels time.

The debate had been a reminder of eroded certainties. In the superpower that was once the EU’s most important ally in promoting democratic norms, sitting president Donald Trump openly called on his supporters to monitor voting at polling stations, told a far-right group to “stand by” and suggested he would not accept the result of the election if he did not win.

It underlined how the EU is ringed by old allies undertaking a retreat from norms.

Britain has declared an intention to unilaterally change an international treaty, in a break with centuries of convention that built up the world order as we know it. The rule-of-law report charted interference with judicial independence in Poland and increased government influence over the media and independent institutions in Hungary, and warned of corruption scandals and vulnerable justice systems across the EU’s periphery.

In her address, Jourova said the bloc had been “created . . . as an antidote to those authoritarian tendencies”. The question now is whether the medicine still has its potency.

The commission expressed a hope that its rule-of-law report would be discussed by national parliaments and authorities, and that it would “feed into the wider debate” on the issue.

But scolding the Hungarian government with a report on its media freedom is a bit like challenging an aspiring autocrat with policy questions in a presidential debate. Both Trump and Hungarian prime minister Victor Orban are skilled not just at disregarding such opprobrium, but at turning it to their political advantage.

Trump used the debate to sow doubt about the validity of the election result in case he loses. Orban’s tactics usually involve pre-emptively accusing others of what he is accused of, and picking a fight with an international figure in the name of a wounded Hungary.

True to form, on the eve of the release of the rule of law report, trolls-in-chief Hungary and Poland announced they were setting up a new institute to monitor the observance of the rule of law across Europe. (Earlier this year, the NGO Freedom House categorised Hungary as no longer a democracy and Poland as not far behind). Orban used the occasion to write to Jourova’s boss, demanding her resignation and accusing her of violating EU treaties by being too political and insulting Hungarian citizens through her questioning of their democracy.

The EU’s challenge is how to deal with governments that openly reject the means through which it wields power. The EU’s response to Britain’s threat to break international law is to prepare legal action. An unpleasant question for Ireland to ponder is whether, given that the British government has made clear it does not always respect international law, it would change its mind if presented by a ruling by the European courts.

A search for a solution to the conundrum is at the heart of a brewing row between EU member states. A group of countries is determined to tie the observance of rule of law to the EU’s weightiest tool: money.

Sweden, Finland, Denmark, Belgium and the Netherlands have insisted that money from a €750 billion pot of recovery funds cannot begin to flow until the bloc nails down a rule that would withhold the cash from governments that flout the rule of law.

As an aspect of the recovery fund must be approved in national parliaments, each of these member states has a veto. The problem is, Poland and Hungary do too.