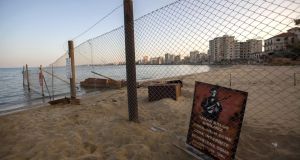 A view of deserted buildings of the tourist area of Varosha, in the fenced off area of Famagusta, in the Turkish-occupied north of Cyprus. Photograph: Birol Bebek/AFP via Getty

The government of Cyprus has strongly condemned the Turkish-Cypriot decision to reopen the public beach of the abandoned Greek-Cypriot resort and residential suburb of the port of Famagusta.

President Nicos Anastasiades has called the move “exceptionally unacceptable” and said Cyprus, an EU member, had filed “a recourse to the United Nations Security Council”.

Varosha, a suburb of Famagusta, has been a fenced no-man’s land since 1974 when its 39,000 residents fled after the Turkish army occupied the north of Cyprus following a failed coup by the Greek junta.

EU foreign affairs chief Josep Borrell said, “The reopening of this area, which is closed under the UN ceasefire agreement, is a serious violation”. He warned that the move “may complicate efforts for the resumption of Cyprus settlement talks” and could exacerbate tensions over Turkey’s exploration and drilling in internationally recognised Cypriot and Greek offshore gas fields.

Turkish-Cypriot prime minister Ersin Tatar announced the move in Ankara while standing beside Turkish president Recep Tayyip Erdogan, who said he approved of the decision.

“God willing, we will begin to use the Maras beach on Thursday morning together with our people,” said Mr Tatar, using the Turkish name for Varosha.

The opening of the beach is intended to mark the first phase in a Turkish-Cypriot takeover of the suburb’s deteriorated hotels, apartment blocks, business premises, churches and golden beaches. Their fate is meant to be resolved in UN-facilitated negotiations aimed at reuniting the island in a bizonal, bicommunal federation. Talks stalled in 2017 and have not resumed.

The reopening of the beach has been timed to give a boost to Mr Tatar’s bid for the presidency in Sunday’s election in the breakaway Turkish-Cypriot state, recognised only by Ankara. His administration has been criticised for failing to contain Covid-19 and encouraging Ankara’s intervention in Turkish-Cypriot affairs.

Mr Tatar, a right-winger, faces two major challengers, both progressives: opposition leader Tufan Erhurman and incumbent Mustafa Akinci, who is loathed by Mr Erdogan. The winner will become the Turkish-Cypriot negotiator if and when stalled talks resume on the future of the divided island.

Mr Tatar calls for a “two-state solution” within a confederation and argues the federal solution supported by his chief rivals is dead.

Mr Tatar’s beach initiative was described as a “tool” to win votes by his deputy and foreign minister Kudret Ozersay, who withdrew his People’s Party from the ruling coalition in protest. Mr Tatar replied by saying his National Unity Party would “consider other coalition options or snap elections following the presidential election”. Parliamentary elections will ensue if he loses.