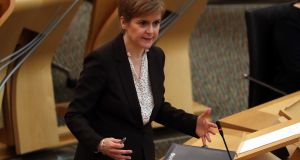 Bars and restaurants throughout Scotland will be banned from serving alcohol indoors from Friday and those in the central belt including Glasgow will be shut down, as coronavirus infection rates accelerate.

First minister Nicola Sturgeon said the shutdown, which will last at least two weeks, is necessary to slow the passage of the virus between households.

“That risk can be increased, in some hospitality premises, if good ventilation is difficult, and if it is hard to control the movement of people. And the presence of alcohol can of course affect people’s willingness to physically distance,” she said.

The harshest restrictions will affect people in areas covered by the Greater Glasgow and Clyde, Lanarkshire, Forth Valley, Lothian and Ayrshire and Arran health boards. All licensed premises in those areas, apart from hotels, will have to close for both indoor and outdoor service, although takeaway service will be allowed. Cafes with no alcohol license will be allowed to stay open until 6pm.

Elsewhere in Scotland, bars and restaurants will be able to serve customers indoors until 6pm but will not be allowed to serve alcoholic drinks. They can serve alcohol in outdoor settings until 10pm.

“These new restrictions will last for 16 days. They are intended to be short, sharp action to arrest a worrying increase in infection. However, although they are temporary, they are needed,” Ms Sturgeon said.

“Without them, there is a risk the virus will be out of control by the end of this month. But with them, we hope to slow its spread. That will help to keep schools and businesses open over the winter. And it will save lives.”

MPs are due to vote on the curfew next week and many Conservative MPs are critical of it, making a government defeat possible if Labour votes against continuing the measure. Sir Keir also challenged Mr Johnson on the failure of local restrictions to slow the spread of the virus in 19 of the 20 places they have been imposed.

“In Bury, when restriction were introduced, the infection rate was around 20 per 100,000. Today it’s 266. In Burnley it was 21 per 100,000 when restriction were introduced. Now it’s 434. In Bolton it was 18 per 100,000. Now it’s 255. The prime minister really needs to understand that local communities are angry and frustrated. So will he level with the people of Bury, Burnley and Bolton and tell them, what does he actually think the problem is here?” Sir Keir said.

The prime minister defended local lockdowns and accused the Labour leader of opportunism in criticising measures he had supported a few weeks earlier.

“The local and regional approach, combined with national measures, remains correct because two thirds of those admitted into hospital on Sunday were in the North East, North West and Yorkshire,” he said.