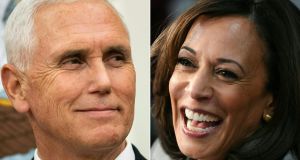 Vice-president Mike Pence and Democratic vice-presidential nominee Kamala Harris are set to go toe-to-toe on Wednesday night (2am Irish time) in their first and only debate of the election campaign.

The match-up in Salt Lake City, Utah is unlikely to turn into the kind of ugly spectacle on display during the first presidential debate, meaning the evening could provide a clearer contrast between the two campaigns’ policy platforms.

Donald Trump’s recent Covid-19 diagnosis and admission to hospital is likely to dominate the discussion, along with the question of whether the administration has done enough to tackle the virus both inside the White House and in the country at large.

On Monday the Commission on Presidential Debates, the non-partisan group that organises debates, announced that both campaigns had agreed to put Plexiglas dividers between the candidates, who will be sitting at separate tables set three metres apart.

But Pence’s team has since pushed back on the agreement, arguing that a physical barrier is unnecessary because the vice-president has recently tested negative for the virus. Trump’s positive test result was announced just two days after he shared the debate stage with Joe Biden, his Democratic presidential rival.

On Tuesday evening the director of the Centers for Disease Control and Prevention, Robert Redfield, issued a statement saying it was safe for Pence to participate in the debate because he was “not a close contact” of anyone with a confirmed case of the illness – including the president.

Trump’s recent treatment in hospital at the age of 74 and the fact that Biden is 77 might also prompt voters to pay more attention to the vice-presidential debate, which does not normally garner as much interest as the presidential match-ups. If either candidate were to die in office, then it would be their running mate who would take over.

Here are five key issues to watch out for in the debate.

Expect the president’s handling of coronavirus – both his own infection and the wider pandemic – to take centre stage. More than 200,000 Americans have died from Covid-19, with many medical experts warning that the public health crisis could worsen as the US heads into the colder winter months.

Trump, who once said the virus would “disappear”, has continued to dismiss the threat posed by the pandemic, even after his three-day hospital stay.

Harris could go after the president and accuse him of putting American lives at risk. She may also attack Pence, who chairs the White House coronavirus task force. The vice-president is likely to defend the administration’s handling of the pandemic, arguing that it has found the right balance between keeping the economy open and protecting lives.

With Senate Republicans vowing to press ahead with confirmation hearings next week for Amy Coney Barrett, the president’s conservative nominee to replace Ruth Bader Ginsburg at the supreme court, the judiciary is all but certain to come up on Wednesday night.

Republicans see the supreme court as a winning issue, and are looking to consolidate support from social conservatives on issues such as abortion and gun control. Democrats are betting that their supporters will be motivated by the legacy of Ginsburg, a liberal icon, and the risk of tougher abortion laws.

Harris, the senator from California, sits on the Senate judiciary committee, meaning she will be able to ask questions of Judge Barrett during the confirmation process. The senator is expected to participate fully in the four-day “hybrid” hearings, taking place both in person and over video conference, amid concerns over the spread of Covid-19 on Capitol Hill. Two of the Republican senators on the committee have tested positive for the virus in recent days.

Trump’s abrupt decision to end stimulus talks with Democrats on Capitol Hill triggered a sell-off in US equity markets on Tuesday, amid concerns that many American families and businesses could face financial distress in the coming months. A recent FT-Peterson poll found almost nine in 10 Americans said Washington needed to pass a new stimulus package to mitigate the fallout from Covid-19.

Expect Harris to accuse the president of abandoning the tens of millions of Americans who remain out of work. Pence is likely to tout the Trump administration’s economic record before the pandemic, and to accuse the Biden campaign of plotting a huge tax rise that would hurt the economy. Republicans are counting on swing voters to cast their ballots with economic issues rather than public health in mind.

During the Democratic presidential primary, Harris was criticised for changing her stance on US healthcare. As a US senator, Harris was one of the first Democrats to publicly back Vermont senator Bernie Sanders’s Medicare for All Bill. However, in her own presidential bid she appeared to waffle, initially saying her healthcare plan would eliminate private insurance, before backtracking and moderating her position.

Pence is likely to zero in on the flip-flopping and paint Harris as further to the left on the issue than her running mate, Biden, who has consistently opposed Medicare for All. Harris, meanwhile, could warn that Trump’s plan to dismantle Barack Obama’s Affordable Care Act would will leave millions of Americans in the lurch.

Pence has been one of the main messengers for Trump’s “law and order” theme throughout the campaign, regularly meeting law enforcement leaders who have backed the president and attacking Biden for not condemning unrest and violence forcefully enough.

Expect Pence to return to the theme again on Wednesday night. However, he could face a formidable opponent in Harris, who might point to her own law enforcement credentials as a San Francisco prosecutor and the attorney-general of California.

Harris could also point to the way that race has shaped not just the protests but the entire American experience, using her personal history as a black, Indian-American woman as an example. – Copyright The Financial Times Limited 2020