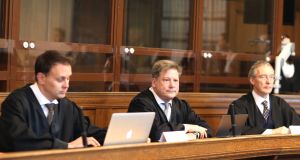 Lawyers for the defendant during the trial of suspected Russian assassin Vadim K in Berlin on Wednesday. Photograph: Pool/Getty Images

A Russian man has gone on trial in Germany accused of killing an exiled Chechen rebel leader in a Berlin park last year – allegedly on the orders of the Kremlin – in a case that has plunged relations between Germany and Russia into crisis.

The highly anticipated trial opened on Wednesday under heavy security at the Moabit Criminal Court, a grand early 20th-century building that has heard some of most high-profile cases in recent German history, including the trial of the former leaders of Communist East Germany in 1992.

The prosecution said Vadim K had been contracted by “agencies of the central government of the Russian Federation” to “liquidate” Zelimkhan Khangoshvili, a Georgian citizen of Chechen descent in Berlin.

Vadim K, who used the alias Vadim Sokolov, was accused of carrying out the killing either for “financial gain” or because he shared the Russian authorities’ desire to “liquidate a political opponent . . . as retribution for his role in the second Chechen war and his participation in other armed conflicts with the Russian Federation”.

Prosecutors identified the defendant as 55-year-old Vadim K, of no fixed abode. But through his lawyer, he said he had been misidentified, that his real name was Vadim Sokolov and that he did not know who Vadim K was.

The execution-style killing of the former Chechen fighter severely damaged relations between Moscow and Berlin. In December the German government expelled two Russian diplomats over Moscow’s failure to help with the investigation. Angela Merkel, chancellor, has threatened consequences if the court finds Khangoshvili’s death was ordered by the Kremlin.

The so-called Tiergarten murder is not the only incident to strain relations between Germany and Russia. In May, Moscow was blamed for a massive hack of the German Bundestag in 2015, which Dr Merkel described as “outrageous”.

The suspected poisoning of Alexei Navalny, Russia’s most famous opposition activist, with a Novichok nerve agent in August heightened tensions further. Dr Merkel demanded that Moscow explain itself over the attack on Mr Navalny, who is now recovering in Berlin after treatment in a hospital in the German capital.

Russia has denied any involvement in the killing of Khangoshvili, who also went by the name of Tornike Kavtarashvili. But after Dr Merkel confronted President Vladimir Putin over the assassination at a meeting in Paris in December, he called Khangoshvili a “bandit”. “In Berlin a fighter was killed who was wanted in Russia, a bloodthirsty and brutal man,” he said.

According to the indictment, some time before July 18th, 2019, the Russian authorities instructed Vadim K to kill Khangoshvili (40), who had been living as a refugee in Germany. The motive was “the victim’s opposition to the Russian state, to the governments of the autonomous republics of Chechnya and Ingushetia and the pro-Russian government of Georgia”, the indictment read.

Khangoshvili had led a Chechen militia fighting Russian forces in Chechnya between 2000 and 2004. In a letter to German police in 2012, Russia’s intelligence service, the FSB, claimed he was a member of a terrorist organisation known as the “Caucasian Emirate”, and said he had trained terrorists in Georgia, helping them infiltrate Russian territory to carry out attacks.

Prosecutors say Vadim K approached Khangoshvili from behind on a bicycle as the latter was walking through the Kleiner Tiergarten park in central Berlin in August 2019 and shot him in the torso with a Glock 26 pistol fitted with a silencer. After Khangoshvili fell to the ground, Vadim K shot him twice in the head, prosecutors say. The Georgian died at the scene.

Witnesses alerted the police after Vadim K was seen throwing the bicycle and other objects into the Spree river. He was arrested as he attempted to escape on an e-scooter.

He is accused of murder and violation of firearms laws. The trial is scheduled to run until the end of January. – Copyright The Financial Times Limited 2020