Iran to release British tanker seized in Strait of Hormuz 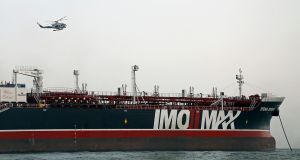 Iran has said it is set to release the British-flagged tanker whose seizure by the Islamic republic more than two months ago sparked a crisis over energy security in the Strait of Hormuz, a vital sea route for oil.

An Iranian government spokesman said it “can leave and decisions [made by the judiciary] suggest the seizure has ended”.

The announcement comes at a time of heightened tensions in the Gulf in the wake of drone attacks on Saudi Arabia’s biggest oil facility that forced Riyadh to suspend more than half its daily production.

Iranian president Hassan Rouhani is this week expected to address the UN General Assembly in New York. Speaking in New York, Iran’s foreign minister Mohammad Javad Zarif said US president Donald Trump had “closed the door” to any negotiations with Tehran with his decision on Friday to toughen sanctions on the Iranian central bank.

Tensions have escalated since the US abandoned the Iranian nuclear deal last year and reinstated sanctions on oil exports from the Islamic republic. While the US is seen as reluctant to get involved in a military confrontation, Iran has rejected calls from the White House for negotiations as long as sanctions are in place.

The Stena Impero was at the centre of a stand-off between the UK and Iran after the Islamic Revolutionary Guard Corps seized it in mid-July in apparent retaliation for British Royal Marine commandos’ impounding of an Iranian supertanker, the Grace 1, off Gibraltar two weeks earlier.

The UK detained the Grace 1 – since renamed Adrian Darya 1 – because it was suspected to be shipping Iranian crude to Syria in violation of EU sanctions. Gibraltar has since released the Iranian ship, whose fate is unknown. Iran said it had seized the Stena Impero because it had failed to observe international maritime rules and regulations. – Copyright The Financial Times Limited 2019