‘Anyone but Netanyahu’: Palestinian hopes rise that nemesis will bow out 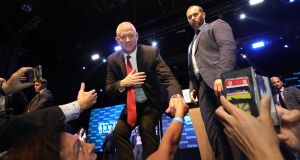 Benny Gantz, leader and candidate of the Israel Resilience party that is part of the Blue and White (Kahol Lavan) political alliance, shakes hands with supporters in Tel Aviv. Photograph: Gali Tibbon/AFP

The Palestinians and Arabs are hoping and praying Israel’s next coalition will not be headed by the right-wing Likud’s Binyamin Netanyahu.

“Anyone but Netanyahu,” says Raji Sourani, head of the Irish Aid-funded, Gaza-based Palestinian Centre for Human Rights, when asked about Palestinian hopes. “The situation will be less worse without Netanyahu. For him, we don’t exist, especially the people of Gaza. In the last few weeks, he spoke about an attack on Gaza but the military objected.”

Mr Netanyahu rejected the 1993 Oslo Accord, which Palestinians believed would lead to self-determination, and insists there can be “no Palestinian state”.

“Over the past six months Gaza has been hit very, very hard,” says Mr Sourani. “Gaza has been under strong pressure, its people feel they have no future, and their only chance is to leave. When Israel was established 72 years ago, people fled areas occupied by Israelis with the expectation they would return . . . If they go now, they will never return.”

West Bank pollster and academic Ghassan Khatib says that “although there are no significant differences between him and his opponent [Benny Gantz], Natanyahu is more dangerous as he has joined forces with the most extreme factions in Israel, such as the radical Kahane movement. Netanyahu is also very well-connected on the international level with Trump and Putin.”

Dr Khatib is positive about the success of the Joint Arab list, which came third in the vote, and about the failure to win seats of Otzma Yehudit, the far-right party associated with the Kahane movement.

Ramallah-based former Palestinian foreign minister Nabil Shaath says the “result was not unexpected. The hardcore Zionists are sharing authority, whether Netanyhau or opposition Blue and White leader Gantz with Yisrael Beiteinu head Avigdor Lieberman acting as the cement between them. The left wing in Israel has evaporated.

“Real change will happen only when the Americans get rid of Mr Trump,” he adds.

Dr Shaath is convinced that “change is coming eventually as the world is becoming increasingly multi-polar rather than run by the US”.

In the meantime, he said, “We are 6.5 million Palestinians [in East Jerusalem, the West Bank and Gaza] and we are not going anywhere.”

Arab governments yearn for Mr Netanyahu’s exit as his advocacy of sanctions and war against Iran has generated tension in the region. Each country has its own issues with him.

Amman has rejected his campaign pledge to annex the Jordan Valley and Israeli settlements and threatened to renounce Jordan’s peace treaty with Israel, signed after the Palestinian-Israeli peace process gave rise to the expectation that a Palestinian state would emerge.

Syria and Iraq are eager for Mr Netanyahu’s fall since he has been bombing their territory, claiming Israel is targeting Iranian and Hizbullah units.

Relations between Egypt and Israel have been strained due to the Trump administration’s proposal, backed by Mr Netanyahu, to settle Gazans in Egypt’s North Sinai province.