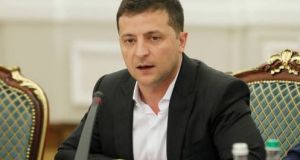 Volodymyr Zelenskiy: he will be asked about his version of the July call and subsequent events. Photograph: Getty Images

As the star of hit film and television comedies that made him famous in Ukraine, co-founder of a successful production company and now president of his nation, Volodymyr Zelenskiy is used to calling the shots.

But this week he must improvise around the unpredictable moves of a bigger player as he prepares to meet Donald Trump on Wednesday amid a storm over whether the US president tried to turn Kiev into a tool in his fight for re-election.

A classified complaint from a member of the US intelligence services is thought to centre on a July telephone call between the leaders, during which Mr Trump reportedly pressed Mr Zelenskiy to pursue an investigation into Joe Biden, who hopes to be the Democrats’ candidate in next year’s US presidential battle.

According to the Wall Street Journal, Mr Trump urged Mr Zelenskiy about eight times to work with his personal lawyer Rudy Giuliani on an inquiry into whether Mr Biden, while US vice-president, misused his influence to force Kiev to close an investigation into the Burisma gas firm where his son Hunter was a director.

Mr Giuliani has pushed this claim hard to US media and Ukrainian officials in recent months. He has done this to the point where it was seen as a possible reason for the White House temporarily delaying $250 million in military aid to Kiev this summer as it entered a sixth year of conflict with Russia and its separatist proxies in the Donbas region.

Three congressional committees are now investigating the actions of Mr Trump and Mr Giuliani towards Ukraine, and on Saturday Mr Biden said “this appears to be an overwhelming abuse of power”.

“To get on the phone with a foreign leader who is looking for help from the United States and ask about me and imply things? This is outrageous,” he added.

Mr Trump insisted on Sunday that the July call with Mr Zelenskiy was “absolutely perfect”.

“It was a beautiful, warm, nice conversation”, but the scandal has completely overshadowed preparations for their first meeting.

They are scheduled to hold talks on Wednesday in New York during the United Nations General Assembly. However, an encounter that Mr Zelenskiy surely welcomed as a chance to bond with the leader of Ukraine’s most important ally has become a diplomatic minefield that would daunt far more experienced politicians.

Reporters are bound to ask Mr Zelenskiy for his version of the July call and subsequent events, and any failure to back Mr Trump to the hilt could be taken as a personal affront by a man who fights feuds and berates critics every day on social media.

“I know what the conversation was about, and I think there was no pressure,” Ukraine’s foreign minister Vadym Prystaiko said on Saturday.

“This conversation was long, friendly, and it touched on a lot of questions, including those requiring serious answers,” he told Ukraine’s Hromadske news outlet, while emphasising Mr Zelenskiy’s right not to reveal what he discusses with other leaders and the value Kiev places on the bipartisan nature of its US support.

The furore has bemused anti-corruption experts in Kiev, who have long dismissed as nonsense the allegations about Mr Biden and Burisma.

Mr Giuliani claims Mr Biden threatened to withhold US funds from Ukraine in 2016 unless it fired then prosecutor general Viktor Shokin to stop him investigating Burisma and shield Hunter Biden from potential trouble.

Mr Shokin had already shelved the case when he was dismissed, however, and he was widely seen as a major impediment to reform and anti-graft efforts, whose eventual removal was warmly welcomed by western diplomats in Kiev.