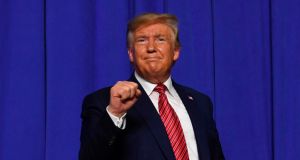 US president Donald Trump hit out at Democratic presidential nominee Joe Biden on Monday, claiming that if a Republican had said or done what Mr Biden has said and done, “they’d be getting the electric chair probably right now”.

Mr Trump was speaking amid a deepening controversy over a phone conversation he had with Ukrainian president Volodymyr Zelenskiy, in which he raised concerns over former vice-president Joe Biden and his son Hunter, who had business interests in Ukraine.

Mr Trump defended his actions, effectively admitting that he had asked the Ukrainian president to investigate unproven corruption allegations against Mr Biden and his son during the July 25th phone call.

Describing Mr Biden and his son as “corrupt”, Mr Trump accused the media of “double standards”.

“You people ought to be ashamed of yourselves. Not all of you. We have some great journalists around. But we’ve got a lot of crooked journalists,” he said to reporters as he met with Poland’s president Andrzej Duda at the United Nations.

The controversy, which arose after a whistleblower reported his concerns about the phone call to the inspector general of the US intelligence services, has overshadowed Mr Trump’s visit to the UN.

Mr Biden’s son Hunter served on the board of a Ukrainian energy company while his father was US vice-president. Ukrainian prosecutors opened an investigation into the owner of the company, a Russian oligarch, and some of Biden’s critics have argued that the vice-president tried to exert influence over the investigation. But these allegations have not been proven.

Mr Trump has remained defiant in the wake of the controversy, insisting he did nothing wrong.

On Monday he denied that he had threatened during the phone call to withhold a military aid package from Ukraine if Mr Zelenskiy did not investigate Mr Biden.

Democrats have reacted with outrage to the suggestion that Mr Trump may have encouraged a foreign government to find political dirt on an opponent. Mr Biden is running for the Democratic nomination for president, and could face Mr Trump in next year’s election race.

The controversy has sparked fresh calls for impeachment proceedings to begin against the president. House speaker Nancy Pelosi, who has taken a cautious stance on impeachment, fearing it could backfire electorally for Democrats, has toughened her rhetoric in light of the controversy, urging the White House to allow the whistleblower to pass his or her information on to Congress.

“If the administration persists in blocking this whistleblower from disclosing to Congress a serious possible breach of constitutional duties by the president, they will be entering a grave new chapter of lawlessness which will take us into a whole new stage of investigation,” Ms Pelosi wrote in a letter to House Democrats.

‘Coequal to the evil’

“I have been very reluctant to go down the path of impeachment,” he said. “But if the president is essentially withholding military aid at the same time he is trying to browbeat a foreign leader into doing something illicit, providing dirt on his opponent during a presidential campaign, then that may be the only remedy that is coequal to the evil that that conduct represents.”

At the very least, Mr Trump is facing calls from Democrats – and some prominent Republicans – to publish a transcript of the disputed phone call.

“I’m hoping the president can share, in an appropriate way, information to deal with the drama around the phone call,” said senator Lindsey Graham of South Carolina. “I think it would be good for the country if we could deal with it.”

But while Mr Trump suggested on Sunday he could be open to disclosing the content of the phone call, some senior administration figures rejected this, saying it would set a damaging precedent.

Mr Trump will address the UN General Assembly on Tuesday. Although he made a brief appearance at Monday’s UN Climate Action Summit, he instead addressed a conference on religious freedom at the same venue.